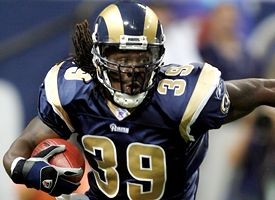 Something odd happened on Sunday, something folks around these parts just aren't used to seeing. See, there was this football game held at the Edward Jones Dome, which isn't all that weird, and the St. Louis Rams played, which isn't all that unexpected either, considering it is their home field. But at the end of the game, something truly inexplicable happened. Everyone in the stadium looked up at the scoreboard to verify the margin of defeat, only to discover that the Rams, somehow, had more points than the visiting Saints.
People were justifiably confused, and somewhat upset as well. Panic didn't set in until later, but even at the time everyone realized the score clearly wasn't right. "Victory," for the Rams, is usually a term applied to them beating the point spread, not the other team. It's like if the Washington Generals one night in the locker held a team meeting and decided, "You know what? Screw this. We're tired of letting those hot dogs use a ladder to dunk the ball," then went out and won.
It only took them seven games, but the Rams finally got it right. They won a game.
What was amazing about Sunday's game, really, wasn't that the Rams managed to actually win a game, nor that the team they beat in doing so was the favored-by-double-digits Saints. What was amazing was it was the first time this season the Rams team we all expected to see this year showed up. Even sans Sam Bradford, that was the team the Rams were supposed to be.
That isn't to say it was a perfect performance, of course. The Rams did still manage to win the game somewhat in spite of themselves, with six false start penalties somehow committed. How you commit six false starts at home is really beyond me. Honestly, the only thing I can think of is Josh McDaniels' offense somehow uses a random number system for the snap count, just to keep everyone on the field guessing.
Somehow, though, the Rams played brilliantly enough for all but about six minutes of the fourth quarter to overcome their mistakes for once, and basically dominated one of the best teams in football. A garbage-time touchdown pass for Drew Brees' vanity made the game look closer than it actually was.
Two game balls to give out. One, Steven Jackson gets the ball for not only his first true Steven Jackson performance of 2011, but for going all Chris Carpenter on the team and just willing them to victory. Seriously, if you haven't yet seen the video of Jackson literally screaming at his offensive linemen on the sidelines following a particularly egregious false start penalty, you should go and find the footage posthaste. That's what a leader does, and that's what this team needs far more of.
Second game ball has to go to the defense as a whole, but with a little extra emphasis on Chris Long, Robert Quinn, and James Laurinaitis. The fact it was the young nucleus of the Rams' defense that stepped up in such a big way warms the cockles of my heart.
Long had the game of his career, with three sacks and an untold number of pressures and hurries. Laurinaitis was a tackling machine, with ten tackles -- all solo! -- and a sack of his own on the day.
Perhaps no other Ram had a bigger day than Robert Quinn, though. In five years, when he's playing in his third pro bowl, we may look back at the New Orleans game in 2011 as his coming-out party, when we finally got more than just a brief flash of what he can do on the football field. A blocked punt and a sack are the numbers that show up in the box, but what should really stick out about this game from Quinn was just how overmatched his opponents looked trying to stop him.
Chris Long has the power and tenacity; he forces linemen back and runs over them with a high-motor second effort opponents just can't match. Robert Quinn, on the other hand, has pure speed and explosiveness you can't teach. He can't bull-rush the way Long can, but he's capable of just running past his man in a way Long will never be able to match.
The Rams blitzed a bit early in the game, but for most of the contest they didn't have to. A four-man rush was more than enough to overwhelm the New Orleans offensive line, and the lesson of pressure was driven home forcefully yet again. The Rams' secondary has been decimated, and they simply can't cover anyone. But being able to pressure the quarterback, even one as talented and productive as Drew Brees, can make up for an awful lot of deficiencies.
The Rams on Sunday finally looked like the team most people expected them to be this season. With Sam Bradford coming back hopefully this week, they may look even more like the Rams we expected heading into divisional play. Or, they could fall back apart. The intensity and fire the team showed on Sunday was a thing of beauty to watch; proving it wasn't just a one-time fluke will fall squarely on the shoulders of every player going forward.
Oh, and also: bring back the royal blue and yellow uniforms. The navy and gold ones have brought us nothing but a decade-plus of disappointment.