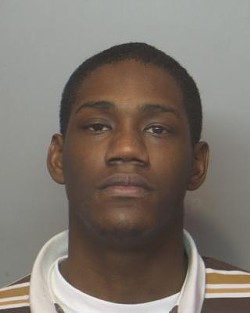 A possible serial rapist is in custody today, accused of raping a woman over the age of 70 in her north county apartment this summer.

St. Louis County police say 24-year-old Dary McCoy pretended to be a repairman on June 10 when he knocked on the woman's door. Once inside, McCoy drew a gun and robbed the woman. But he wasn't finished.

He then raped and sodomized her, according to police. Before leaving the scene, McCoy allegedly gagged the woman with a sock, tied her up with the belt from her nightgown and threw her in a closet.

Police matched his DNA to the scene two months later when McCoy they picked him up in in August for failing to appear in court for a 2009 burglary charge. A DNA test following that arrest placed him at the scene of the June rape.

Court records indicate that McCoy could be a serial rapist.

In September a grand jury indicted McCoy, of the 10100 block of Ventura Drive, with deviate sexual intercourse and sodomy involving a person under the age of 14. According to court documents, that assault occurred on New Year's Day of 2008 in which McCoy allegedly used a deadly weapon to rape the minor.