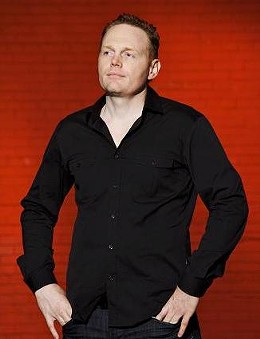 Nobody personifies wise-ass East Coast standup quite like the Boston-born Bill Burr (he once told an entire crowd of heckling Philadephians, "I hope your mother has herpes in the center of her asshole").

Yet he's scheduled to perform at Carnegie Hall in November thanks to his crossover appeal: Burr harbors the same dark feelings that "enlightened" people do, only he's got the guts to admit it - and to mock himself for it.

He'll be at the Pageant with St. Louis-based comic Andi Smith on Saturday.

Daily RFT: In your comedy, you sound like the dive-bar wisecracker, the regular Joe. But regular guys don't play Carnegie Hall.

Bill Burr: Sure they do! Everybody going in there, at some point, was getting picked on, or something happened to them. Regular people play it all the time.

[laughs] If you saw me the other day in Home Depot, trying to find a light bulb I could not find, and I had to ask this woman to help me find it, you would definitely say that regular people play Carnegie Hall.

Have you seen comedy there before?

No, I've never set foot in the place.  I actually have not even mentally dealt with the fact that I'm going to be there because - I'm not going to lie to you - it's a little overwhelming.

Probably doesn't help that I'm asking about it.

Yeah but I got an ego just like anybody else, so I love being asked that question. I'm beyond psyched. My ego has been appeased.

Saying I was a fan is an understatement. I was like a Star-Wars geek. And now the fact that I got to be on it was one of those moments - like the way I'll step back right before I do Carnegie Hall to be like, 'Wow, this is one of these moments. This is why you did it.'

Breaking Bad was one of those times, when I was like, 'I can't believe I'm on this friggin' set.' I had a good poker face though. I played it off like I wasn't totally geekin' out, but I definitely was.

Have you watched your scenes?

Yeah, I'm such a fan of the show that I have to watch the episodes. So that's my excuse for watching my big dumb head on TV. I have to be honest wit you ,I don't like watching myself.

But those two scenes that I did, I actually felt good about them and I wanted to see them. So I sat there an inch away from the screen with a bucket of popcorn waiting for me to come on, while in the back of my head going, 'Please don't suck, please don't suck.'

You live in California now, but you seem like the kind of guy who would be really annoyed by that place.

No I love it. The reason why most East Coast guys get annoyed by the West Coast is that they come out here and they try to do East Coast stuff.

It's like the New York syndrome. New Yorkers think that they're these worldly people because they live in New York, and they have the exact same mentality of some guy who lives in the backwoods of Alabama. They just think where they live is the shit, and everything else sucks.

And it doesn't help that they have nine million songs written about New York that absolutely blow the city. Alicia Keys, "New Yorrrrk" and all that type of stuff. And everybody's always walking around, feeling like they're winning. And most of them aren't.

Most of them are just shitheads wearing sweatpants eating a slice of pizza, but they're standing next to awesome stuff: they're outside of Madison Square Garden. They're in Times Square. They walk by the Met, eating a hotdog. But at the end of the night, you go back to your overpriced fuckin' closet, and you're not making it. You haven't made it there, so chances are, you won't make it in Cleveland either.

You know what it is? It's that Mark Sanchez syndrome, where everything in New York is just heightened because it's this media capital. And Mark Sanchez, who for the last three football seasons, people have been trying to cram down my throat, telling me that he's one of the elite guys out there, when all he does is manage the game.

If you scratch your ass in New York, you're instantly a national superstar. And if you throw for 400 yards in Seattle, nobody knows about it. It's ridiculous.

How about Europe? Didn't you just do a tour over there?

Ah, it was amazing. Most people are bilingual, and they understood 90 percent of it. And I just did my act like I was standing in the middle of this country.

I had a bit about Hitler that was really fun to do. I wasn't really thinking that if you do a bit about Hitler in Europe, whatever city you're in either got bombed by him, or they were in an alliance with him and now it's really embarrassing. It made for some awkward moments over there that were a lot of fun.

I'm gonna write another hour and go back over there next year, hopefully make a little bit of money this time and then I'll go spend it in Paris getting treated rudely by those people. It's gonna be great.