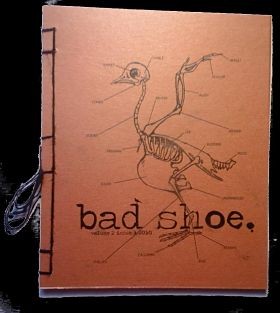 Not many will admit it, but something inside even the most high-toned of literary snobs shrivels and dies a little when he or she hears the word "poetry reading." Why do you think they always serve liquor at those things?

Tonight when JKPublishing launches the seventh and latest issue of Bad Shoe, its art and literary magazine produced by and for the women of St. Louis, there will be poetry, and there will be reading aloud, but don't call it a "poetry reading." JK's founder and publisher CJ Smith prefers the term "spoken-word show."

"It sounds less dull than 'poetry reading,'" he explains. That's also why, in addition to readers, the event which begins at 7 p.m. at The Archive (3213 Cherokee Street) will also features bands and a fire-eater.

"Spoken word is great," Smith insists. "It doesn't have to be dull. So many times I've heard, 'I don't like poetry, but you guys are cool.' We want to revise people's perceptions of what spoken word is."

Though the ultimate goal is, of course, that people will buy -- and read -- the magazine.

Bad Shoe has its roots in a cow barn in Athens, Ohio, where, as Smith tells it, he was milking cows one day and trying to figure out what to do with his life. "I was a very educated dairy farmer," he says. His interest in poetry led him to Designated Space, a weekly spoken-word event in an Athens coffeehouse, where he met Erin Wiles, then an undergrad at Ohio University.

"I was a big fan of Harper's magazine," Smith recalls. "I started to put two and two together and realized that I was hearing just as good voices from the kids in this college town as I was in that magazine. They were just a little rougher."

So in 2005 he and Wiles started publishing the work of those college kids. "We were getting authors out there," he explains. "They were students. They needed a paper trail, something to put on their resumes. We thought a chapbook would help."

When Wiles graduated and moved to St. Louis in 2008, Smith came to visit and was impressed. "When you're thinking about moving to a place, you hear a lot of, 'This is a good town, but.' When I was here, I heard, 'This is a great town and there are a lot of cool things going on.'"

He set up headquarters in the Shaw neighborhood, called it St. Louis Projects and started looking for writers to publish. Almost immediately, he and Wiles noticed that in the St. Louis poetry scene there was a dearth of female voices. "We wanted people who were not teaching in the academy, people with raw voices," he says. "That's where the energy and passion seems to be."

The result was Bad Shoe, edited by Wiles and Ellen Herget and printed and handbound by Smith. The magazine is more or less a quarterly: It comes out four times a year, but not an a set schedule. It is by far JKPublishing's bestseller, though the catalog also includes chapbooks by St. Louis poets, including Michael Castro and Colleen McKee. The Missouri History Museum recently acquired copies of everything JKPublishing has produced since 2009 and has requested all future publications.

JKPublishing is, in Smith's words, "pretty fucking independent." Its budget comes from book sales, not from grants from arts organizations, though Smith is considering including advertising in future issues of Bad Shoe. ("It would just increase the scope of who's involved. We don't want to charge $500 for a piece of paper. You can just show your support by buying space.") Print runs are small -- Smith still sews the binding of each book himself -- and editing and distribution remain the work of volunteers.

Nonetheless, the organization has continued to expand, in an amorphous sort of way. There are now divisions in Seattle, San Francisco and Merida, Mexico, supported by far-flung disciples of the spoken word. There are plans for another magazine for St. Louis writers. Smith has also begun taking graphic design commissions.

I've only said, "I love you" to relatives, several foods, numerous dogs and Nick. Last spring he did something bad with a table saw. Nick said, "How can I love you when I hate myself?"

Conor and I went to a concert. A man in a cape threw glowsticks at us and we left with bruises and other people's sweat. Conor owned a typewriter, a record player, and a Macbook Pro. Never ate meat. I admitted one night I never read Howl, "I'm saving it for harder times." The next day he wrote, "12:16 pm yur super cool but i cant SRY" and I laughed because he never used the typewriter

David invited me to his room. He boiled beets for dinner, "They make your piss pink," he said and led me to the bathroom. "I didn't flush so I could show you." We stood over the toilet bowl, pale pink, still. A minute passed. I admitted I expected it to be pinker. "You're nuts, Allison, my piss is incredibly pink! Do you know how many beets I ate?"