Can the Cards Survive the Deadly Ex-Cubs Factor? [UPDATED] 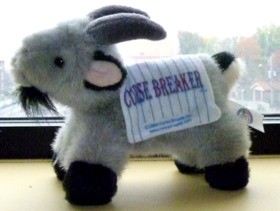 Update October 31: It turns out they can! (It was proven in 2008 when the Rays lost to the Phillies that minor-leaguers do count as ex-Cubs.) Which means...if the Ex-Cubs curse has been broken, is the Curse of the Goat far behind? Dare we say -- Cubs in 2012?

Original post: Cardinals Nation, we at Daily RFT have some sad news for you: We have discovered a new obstacle to the Cards winning this World Series, greater than anything they have faced before.

No, it's not the strength of the Rangers' hitting or the depth of their bullpen. It's not the seeming abandonment of the team by its Rally Squirrel. It's not even the malfunctioning bullpen phones at Rangers Ballpark in Arlington (damned technology)!

It's something even darker and more insidious, an evil virus that has plagued World Series-bound baseball teams since 1945. We refer, of course, to the Ex-Cubs Factor.

First identified in 1981 by Ron Berler, a Cubs fan and stats nut, and publicized by the late, great Chicago Tribune columnist Mike Royko, the principle behind the Ex-Cubs factor is simple, yet deadly.

Since 1946, thirteen teams had entered the World Series with three or more ex-Cubs on their roster.

Twelve of these thirteen teams lost.

Berler theorized that it was a virus. Three or more ex-Cubs could infect an entire team with the will to lose, no matter how skillful that team might appear. 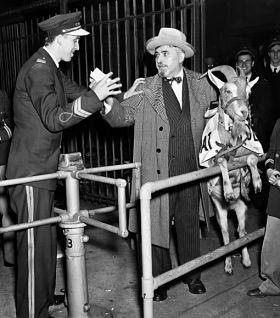 The roots of the Ex-Cubs Factor go back to 1945 when Billy Sianis, owner of the Billy Goat Tavern in Chicago, attempted to bring his pet goat to Wrigley Field to watch the fourth game of the World Series between the Cubs and the Detroit Tigers. Cubs personnel asked Sianis to leave because the smell of the goat was bothering the other fans. Outraged, Sianis placed a curse on the team, declaring, "Them Cubs, they aren't gonna win no more."

And, indeed, the Cubs have not been to the World Series since. Sam Sianis, Billy's nephew, has attempted to lift the curse on several occasions by bringing a goat to the pitcher's mound, but all it led to has been a temporary reversal of fortune and revival of hope, quickly quenched by such disasters as the Steve Bartman game.

But the taint of Cubness extends beyond the team itself. Ex-players become carriers, too. Only two teams have broken the curse: the 1960 Pittsburgh Pirates and the 2001 Arizona Diamondbacks. But you will note that the 1961 Pirates tumbled to a 75-79 record and a sixth-place finish, while (as devout Cards fans surely remember) the 2002 Diamondbacks finished first in their division but lost to the Cards in the first round of the playoffs.

And so, this brings us to this very moment, Game 6 of the World Series, with the Rangers leading the Cards three games to two. Daily RFT carefully checked the history of every player on both teams' rosters, including managers and coaches. The Rangers have just one ex-Cub, Andres Blanco.

And the Cards? The Cards have Ryan Theriot and Corey Patterson...and Kyle Lohse.

The Lohse case is tricky, though. While Lohse was drafted by the Cubs in 1996 and played for two full seasons and part of a third in the Cubs' farm system, he was never actually a full-fledged Chicago Cub, only an Arizona Cub and a Daytona Cub and a Rockford Cubbie.

What does this mean? How much of a taint does an ex-Cubs minor-leaguer bear? Does this explain Albert Pujols' error at the end of Game 2 and his foolish hit-and-run call in Game 5? Does it explain the team's alarming propensity for leaving men on base? Does it even account for the business with the bullpen phone? (If that doesn't bear the mark of Cubdom, we don't know what does.)

We'll find out tonight -- or tomorrow -- if the Cards can withstand this evil virus. The suspense grows ever stronger.