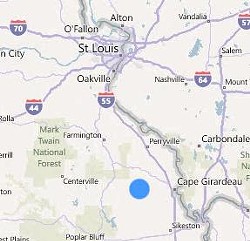 Authorities in southeastern Missouri are investigating a wanton case of animal abuse.

On Saturday the sheriff's department in Bollinger County was made aware of the smoldering remains of a canine tied to to a pole outside the town of Marble Hill. The dog was so charred it was impossible to identify its sex. Evidence suggests that whoever killed the animal also dragged it down the road before tying it up and burning it alive. Deputies buried the animal on site.

"It made my deputies sick to even find this kind of thing," Sheriff Leo McElrath told KFVS. "It really upset all of us to think someone would treat a dog like that."

The Southeast Missourian adds that the sheriff's department has agreed to dig up the dog for the Bollinger County Stray and Rescue Group, which will pay for an autopsy of the animal. The organization hopes evidence from that medical exam might track down the animal's owner and bring its abusers to justice.