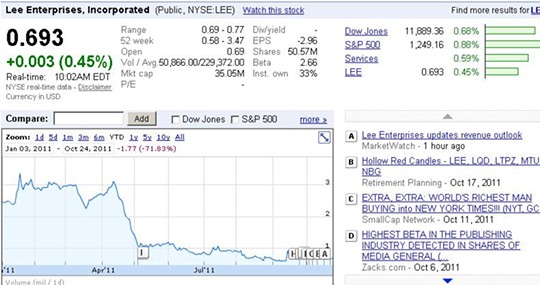 The fiscal year is over for Lee Enterprises, the Iowa-based owner of the St. Louis Post-Dispatch, the Arizona Daily Star and a host of other daily newspapers -- and the news is not good. While the company is still finalizing its accounting, it projects that revenue will be down 3.3 percent for this past year compared to the one before that.

And while 3.3 percent isn't terrible -- the economy continues to stink, and the proliferation of free content online continues to make profitability difficult for newspapers -- it's problematic in that revenue was already down 7.3 percent in 2010 compared to 2010. So they're not just declining; they're declining from a previous decline.

So what does that mean for investors? Lee owes nearly $1 billion in debt, which is coming due soon. And while it's worked out a plan to refinance -- and push back payment -- on $864 million of it, it still needs to secure refinancing on another $175 million. With stock trading at just around 70 cents per share, a far cry from the heady days of the company's acquisition of the Post-Dispatch, when it traded for nearly $40, it faces delisting from the New York Stock Exchange.

So, another 3.3 percent decline isn't exactly the end of the world. But it's not good, either. This is a company that could use some good news; today, at least, they're not getting it.