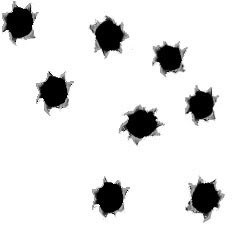 A north St. Louis home resembles a block of Swiss cheese this morning after gunmen fired shots into the residence on three separate occasions between Sunday afternoon and early this morning.

The first shooting occurred around 1:50 p.m. yesterday when a dark green Ford Taurus stopped in front of a residence in the 4500 block of Anderson and fired shots, grazing in the shoulder a 35-year-old male inside the home. The victim was taken to an area hospital and treated. The Ford Taurus, meanwhile, was later located abandoned in an alley.

Twelve hours later -- at 1:49 a.m. today -- gunmen returned again, firing shots into the same home. This time a 38-year-old man inside the residence was grazed in the arm and taken to the hospital.

But the gunmen weren't finished. Not yet.

According to St. Louis police, suspects returned at 3:31 a.m. today and again fired shots into the home. This time a 74-year-old male was grazed in the leg. He refused medical treatment.

Witnesses reported a newer model burgundy van or SUV leaving the scene this morning. Police say that they believe several individuals inside the home were the intended targets. (Duh.)