Brandon Cavanagh Is Ready for Game 5 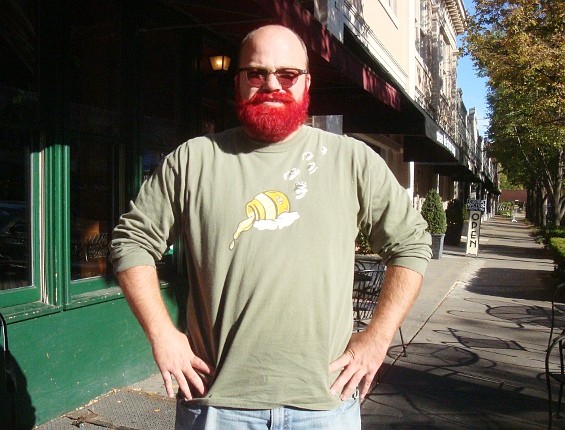 ​In an effort to celebrate the people who keep our city interesting, Daily RFT is launching a new weekly blog post, "Bold Types," featuring photos and street interviews with the fashionistas, fresh faces and free spirits of our town.

I'm guessing you're either a Cardinals fan or a shopping mall Santa Claus with too much time on his hands. [Laughs.] One of the two. I'm not sure which yet, I haven't figured it out.

When did you dye your beard? I did the first round last Tuesday and finished the rest of it up on Thursday.

Walk me through the process. Well I was actually in the middle of nowhere in California when I dyed it; I couldn't get to any good dye, but I wanted to make sure I had it done before Game 1. It was more burgundy than red, though, so I went to a salon on Thursday -- Verve, on South Grand -- and had it professionally done.

Did the stylist appreciate the gesture? Very much so. She said she'd been doing this for 24 years and never had such an interesting task -- to blow dry and dye a beard.

What are your thoughts on the Card's prospects? I think we'll take it in six.

How long will you keep the beard? That's the most popular question. Win, I think it stays until dye fades, which is about six weeks. I don't have any job interviews planned. Lose, and it might go.

What's the reaction been on the streets? There've been lots of laughs, lots of strange looks and lots of questions. People wonder if it's real.

Do mothers ever try to protect their children when you walk by? They should.