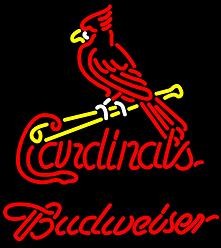 St. Louis gossipmeister Jerry Berger writes this week that Anheuser-Busch InBev "is pissed" with a friendly wager that Mayor Francis Slay made with Arlington Mayor Robert Cluck over the World Series.

The bet would have Slay winning some Texas steaks if the Cardinals win the series. If the Rangers triumph, Slay would send Cluck various St. Louis delicacies, including beer from the local microbrewery, Schlafly.

But doesn't Slay know that St. Louis is a Budweiser town?!

Berger quotes an anonymous A-B executive saying that the slight "has gone all the way up to top officials and some of them are vowing to withdraw all support of the city."

Daily RFT was unable to get an immediate response from AB InBev on the alleged controversy. But over at City Hall, Slay's spokeswoman Kara Bowlin says she's unaware of any flack. She says she's also the one who came up with the gift basket for the Arlington mayor should the Cardinals lose the series.

"Nobody tells me what to include -- or what not to include," says Bowlin. "And all bets make someone happy and someone unhappy."

The mayor's spokeswoman adds that she was trying to feature smaller St. Louis businesses in the wager with Arlington. And, she notes, that the mayor's office gifted the First Lady some fresh-brewed Budweiser during Michelle Obama's visit to St. Louis yesterday. The mayor's office also included Budweiser in its bet with Philadelphia Mayor Michael Nutter in the National League Division Series, says Bowlin.