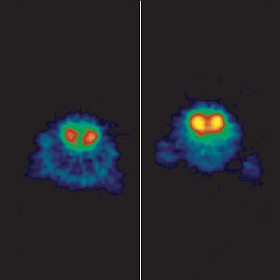 Though it seems like every kid who used to be labeled "hyperactive" now has attention deficit disorder, not all forms of ADD are the same, and some treatments can work better in some kids than in others. A group of scientists at Washington University has developed a new test to determine -- quickly! -- whether ADD meds are working.

Most people who suffer from ADD have a deficiency of a brain chemical called dopamine. At least, that's what the scientists, led by Dr. David H. Gutmann, a neurology professor, proved in a series of experiments on mice last year. The mice had been genetically engineered to have neurofibromatosis type 1 (NF1), a genetic condition that is known to cause ADD. (It affects 100,000 Americans, 60 to 80 percent of whom develop ADD.) After receiving a dose of Ritalin, the dopamine levels in the mice returned to normal and they stopped showing symptoms of ADD.

Now the scientists have figured out a way to determine dopamine levels with a type of brain scan called positron emission tomography (PET). The scientists ran PET scans on ADD mice that had been treated with different medications.

Gutmann worked with Robert Mach, a professor of radiology at Wash. U., and Jinbin Xu, a radiology instructor, who had been working with an imaging agent called raclopride, which binds to dopamine receptors in the brain and shows up on PET scans. When dopamine levels were low, there was more raclopride binding, and the image produced by the PET scan was brighter. After a dose of Ritalin, however, the dopamine levels were higher, which meant less raclopride binding and dimmer images.

"This finding suggested that raclopride PET imaging could be used as a platform for preclinical testing of drugs that may affect brain dopamine levels," Gutmann said in a press release. "We can get an image in an hour and assess the effects of the drug on mouse behavior in a day."

Gutmann and his team tested two other ADD medications. One worked. Another, currently in clinical trials, did not.

So far, all of Guttman's studies have been on mice due to high levels of radiation from the PET scanner. But a new scanner at Wash. U. uses less radiation, which will be safe to use on children with NF1.

"At some point, we envision a prescreening process that identifies children with reduced dopamine levels most likely to respond to Ritalin or other medications," Gutmann said. "As we learn more about the different ways attention deficits arise in these children, it may be possible to use the prescreening data and preclinical drug tests in mouse models to select the best drug for each patient."

Eventually, the method may be used to evaluate drugs for patients whose ADD doesn't come from NF1.

"Prior to our study, there was no molecular basis for using Ritalin to treat children with NF1 and attention deficits, so its use depended on the pediatrician's practice, the severity of the attention deficit and how comfortable the parents were with the use of medication," Gutmann says. "In general, only the most severely affected kids are being treated, but that may change in the future."