"That Is Not a Smooth Move, My Brother": Bryson Stumbles Through Jail Break Testimony 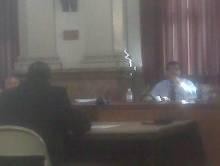 Director of Public Safety Charles Bryson brought around ten corrections officials with him for his testimony at the Board of Aldermen Public Safety Committee's jail break hearing on Monday. Whenever he got a technical question he wasn't sure about-- like how often federal marshals inspect the facilities (twice a year) or whether the prison population was higher ten years ago (it was) -- he turned and asked the officials sitting in the front row, including a Chief of Security, a Detention Superintendent and a Captain.

Halfway through Bryson's two hour testimony, 27th Ward Alderman Greg Carter, the committee chairman, paused the proceedings to ask, "With the number of escapes we've had, should those people be sitting here?"

Bryson said that they were there to ensure that the questions could be answered as accurately as possible. Carter was perplexed by this response because, he noted, he had given Bryson a written list of questions three weeks ago. Then Carter asked the most obvious question.

"So who is overseeing MSI?" he said, referring to the Medium Security Institute, which has had three break-outs in the past fifteen months.

"Lieutenants," said one of the officials in the front row.

There was a pause.

"Lieutenants?" said Carter, raising his eyebrows and turning his head to Bryson. "That is not a smooth move, my brother. How embarrassing would it be, Charles, if there would be an escape right now, while these people were at City Hall?"

Bryson turned to the officials and told them they could go. The officials stood up and left.

It was that kind of day for Charles Bryson.

The hearing was the first time Bryson was forced to address the contents of the Stubblefield Memos, which indicate that Corrections Commissioner Gene Stubblefield had warned Bryson, his boss, for months that the jails were vulnerable because of cuts to managerial staff positions.

Bryson addressed the memos by either ducking questions or turning the blame on Stubblefield, who is currently on forced leave.

In one exchange Carter asked Bryson about the Unit Manager positions which, a memo shows, Bryson recommended for elimination.

"In your experience, would you say the Unit Managers are necessary?" said Carter.

"That's not for me to say," said Bryson, adding that the Detention Superintendent would be in a better position to answer that question.

"Didn't you make a recommendation to eliminate them?"

"If you're not sure, why would you make those recommendations?"

Bryson asserted that he felt the positions were expendable because they had been left vacant for four months. In an ideal world, he added, no positions would be eliminated. But with the budget so tight, he had to prioritize. He said that the state suggested that the Chief of Security positions were crucial, so he decided to cut other positions in order to save them.

"We don't leave positions open," Bryson said. "I have signed every request and sent it to the personnel department."

"I would ask that due to the ongoing investigation of Commissioner Stubblefield that I not answer that question," said Bryson.

French then asked if people are currently working out of classification to fill those vacant positions.

"Charles, you're under oath," said Carter.

French asked the question again and Bryson continued to duck, saying things like, "there might be a point where you're acting out of title for a brief period of time."

Then French cited one of the memos, which were released by Board President Lewis Reed's office: Director of Personnel Richard Frank wrote to Bryson in January, "The Department of Personnel is very concerned about Corrections employees being worked out of their classifications."

The documents also show that a month later, Stubblefield wrote to Bryson that he was concerned about the managerial staff reductions because they forced him to "use senior ranking correctional officers in acting managerial roles to shore up that lack of middle manager positions to provide direct supervision of facility operations and security functions."

With French hammering away, Bryson eventually admitted that "some of those positions working out of title are ongoing."

The Aldermen, at times, defended Stubblefied, who has been the city's fall-guy for the recent string of escapes. French pointed out that the last jail break outbreak in St. Louis happened in 2001. Stubblefield became commissioner of the Division of Corrections in 2002 "and the escapes stopped." Then Bryson became director of public safety in 2007. He eliminated positions soon after. And in 2010 and 2011, there have been four jail breaks.

After Bryson explained some of the strategies to prevent future jail breaks, such as more security cameras, Carter referred to a memo Stubblefield wrote to Bryson on September 9, 2010, in which Stubblefield recommended the use of security cameras. He ends the note, "Your prompt response to this is appreciated."

"He was trying to do the same thing for security that you're doing now," said Carter. "So do you want to respond to that?"

Bryson said that the memo "would have been after the 2011 budget was put to bed" and that if Stubblefield wanted the cameras he could have used the money available to him through the corrections division's building and grounds fund.

"Was he not asking for your permission to put the cameras up?" asked Carter.

"I would have asked then, 'Do you have money in your budget to do it?' That would have been a simple question." said Bryson.

"So why didn't you respond?"

"There's no record showing that you did."

"All right, let's move on," said Carter. And the questions continued.