Whom to believe? St. Louis politicians who say their communities are overrun with feral canines? Or the man who's been left the task of managing stray dogs in St. Louis after the city closed its animal pound last summer?

This week, Board of Aldermen president Lewis Reed told reporters that he's witnessed packs of wild dogs -- 10 to 15 large -- roaming the streets of north St. Louis. A few days earlier, alderman Antonio French (Ward 21) posted a video clip onto YouTube showing stray dogs roaming near where kids stood waiting for a school bus in north city. Fellow north city alderman Quincy Troupe (Ward 1) has called on the city to round up and kill the dogs.

Listening to the politicians, you get the sense that north St. Louis could double as a scene from a documentary titled Wild Dogs of the Serengeti. But is it really that bad? And are the dogs really the problem?

Randy Grim, founder of animal shelter Stray Rescue, says no. He contends that the problem is the people -- particularly the people of north St. Louis -- who are absolutely clueless on how to care for their pets and obey animal regulations. He points to a particularly disturbing call he made last week after a woman called the city to complain about her own two dogs. Grim and his rescue team found one of the dogs so starved that it could barely walk. They discovered the other other dog, barely breathing, in the alley dumpster behind the house.

"She told us that she had thrown the other dog away," recalls Grim. "She said it as nonchalantly as someone might comment on the weather."

But it's what the woman said next that completely floored Grim. She told him that she hoped her next dog would be a Yorkie.

"Right then I had an epiphany," says Grim, who's been rescuing stray animals in St. Louis for twenty years. "I wasn't angry with her. What do you do when a person doesn't know they didn't do anything wrong? The answer, to me, is that we need to address the real problem -- and that's the people."

Grim and his executive assistant, Jennie Foster, rushed the two dogs to Stray Rescue's downtown shelter. The dog found in the dumpster, who they named "Our Little Boy," died on the operating table from severe malnourishment. His sister, "Our Little Girl," survived but remains a walking skeleton -- her ribs and bones protruding from her skin -- as Grim and his volunteers attempt to nurse the animal back to health.

Grim says that he was so moved by the story of what happened to the two dogs that he felt compelled share it on Stray Rescue's website. He didn't mince words, writing:


We should be disgusted and disgraced at what we have let happen and have allowed to become part of many people's daily lives...abuse to our four legged companion animals. There is no support to change North St. Louis. No money nor education. There is just us to clean up their messes and cry. I live in an ignorant city. The problem is primarily in North City. 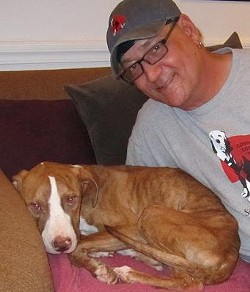 With "Our Little Girl" at his side yesterday, Grim explained his rationale to Daily RFT. After  Mayor Francis Slay made the decision to close the city's animal shelter on Gasconade last year, Stray Rescue began receiving citizen calls to the city complaining about stray dogs and other animal concerns. Today Stray Rescue fields about 200 such referrals a month from the city's Citizen Service Bureau. Grim says that the vast majority of those calls -- around 90 percent -- come from north St. Louis.

"You see an uptick in calls in the morning and then again in the evening when people come home," says Grim. "They let their dogs out to roam. We'll respond to a call and people will yell, 'Hey, that's my dog.' So then you have to ask, 'Okay, which dogs do you want us to pick up?'"

Grim disagrees with Reed and others in the Board of Aldermen who say that the dogs are feral. "They're not wild," he says. "They're their constituents' dogs."

As Grim sees it, the city is at least partially to blame for people's attitude toward their pets. For the past 40 years, he says, the city would come and collect dogs when the owner no longer wanted the animal. In doing so, the city bred a culture of people treating pets like as though they were disposable. He recalls going to a home of a man who admitted shooting a dog he no longer wanted.

So, how to address the larger problem of human ignorance and cruelty toward animals? Grim says that in a perfect world, four things would happen:

1. The city would open a new facility for bite dogs and other canines viewed as a threat to humans.

2. Stray Rescue and other city shelters -- including the Humane Society -- would handle the rest of the dogs, working together to house and adopt out animals.

3. St. Louis would employ at least two police officers whose sole job would be to investigate animal complaints. (Grim says he no longer calls police to report animal abuse because most the cops are ignorant of the law. "It's like a game of Russian Roulette," says Grim. "Some officers would take it seriously, others would laugh at me.")

4. Multiple charities and other agencies would help educate the community on responsible pet ownership, including the leash laws and penalties and fines for those who abuse animals.

Earlier this summer the mayor proposed giving Stray Rescue $250,000 that the city collected to build a new animal shelter that never materialized. Grim says he never asked for the money, and he's not sure he'd even want it now after several aldermen protested giving the gift to Stray Rescue. He realizes that he's now in the middle of a pissing match between aldermen and the mayor's office over how to respond to stray animals. It's a position he loathes.

"I got my first taste of politics this summer, and it wasn't good," he says. "The fact is, we never signed a contract with the city and we've never been paid a dime. And I'm not the city dog catcher."

If there's a silver lining to any of this, it came last week when an anonymous donor coincidentally stepped forward to offer to match the first $100,000 donations made to Stray Rescue's Stracks Fund, which pays for emergency medical care for abused and neglected dogs. (Donation form here.)

That same medical care couldn't save "Our Little Boy" last week, but Grim hopes it will save other abused animals.

"To me the gift means that he did not die in vain," he says.