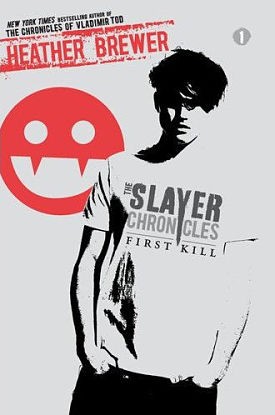 We don't know of any other author for young people that understands her readers as well as local writer Heather Brewer. (Or, as these readers call her, Auntie Heather. She calls them her minions.) Devoted readers always want more. Sure the Harry Potter series was longer and there were movies, but what has J.K. Rowling done since the last book came out in 2007 besides taunt us with promises of Pottermore?

Now Brewer on the other hand -- when she finished the final book in her Chronicles of Vladimir Tod series, the story of the coming-of-age of a young half-vampire (who does not sparkle, thankyouverymuch), did she give up on the world that had so beguiled her readers? No, no she did not. Instead she sat back down and started a companion series, The Slayer Chronicles, which recounts the events in the Vladimir Tod books from the point of view of Vlad's friend-turned-mortal enemy, the vampire slayer Joss McMillan.

The minions have rewarded this show of compassion by making The First Kill, the first book in the new series, this week's number one Children's/YA Bestseller. The final Vladimir Tod book, Twelfth Grade Kills, is also on the list, at number eight.

1. Good Eats 3: The Later Years by Alton Brown 2. Don't Vote It Just Encourages the Bastards by P.J. O'Rourke 3. Cleopatra: A Life by Stacy Schiff 4. The Night Circus by Erin Morgenstern 5. The Story of the Qur'an: Its History and Place in Muslim Life by Ingrid Mattson 6. Go the Fuck to Sleep by Adam Mansbach and Ricardo Cortés 7. Freedom by Jonathan Franzen 8. The Cradle in the Grave: A Novel by Sophie Hannah 9. Arguably: Essays by Christopher Hitchens by Christopher Hitchens 10. 365 Oddball Days In Boston Red Sox History by John Snyder