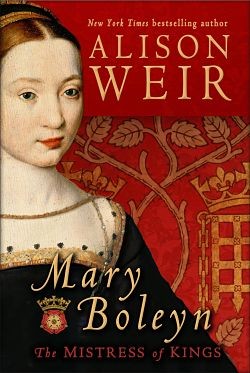 If you've read The Other Boleyn Girl (or seen the movie), you probably think you know all about Mary Boleyn, Anne's beautiful, slutty and not-quite-as-bright sister. But the British historian Alison Weir knows way more than you do: She's been acquainted with Mary for nearly 40 years, thanks to an abiding interest in Henry VIII and his wives which has produced more than a dozen books, both fiction and nonfiction. A few years ago, she decided that, in order to clear up the many misconceptions about Mary Boleyn's life and lovers, Mary deserved a full-length biography of her own (previously none existed). Mary Boleyn: The Mistress of Kings is out this month, and Weir was scheduled to read at the St. Louis County Library Headquarters tonight. Unfortunately, Puddn'head Books, which was sponsoring the reading, reports that Weir has had to cancel her tour due to illness. However! Last week Daily RFT rang up Weir at her home in England and asked some questions for you. You're welcome! (If you're reading this, we assume you can also read the book for yourself.)

Daily RFT: How hard was it to write a biography of someone about whom virtually nothing is known?

Alison Weir: There's actually quite a lot known about her, but it's the wrong thing. The view of her in The Other Boleyn Girl and [the TV series] The Tudors is a romanticized view. I was struck by how different her life was. She has a notorious reputation now for being the king's mistress, but during her lifetime, she had no reputation at all. We only know of her affairs through later sources. There's endless speculation that the children of her first marriage were fathered by Henry VIII. I've found strong evidence that only her daughter was fathered by Henry. You gather fragments of information. You don't get close to the subject. You infer.

What were those circumstances? She was married at the time, right?

Yes. Cardinal Pole wrote a treatise that accused Henry of "violating" Mary [when the affair started in 1522]. In the early sixteenth century, "violate" still meant "rape" or "ravishment." Even if she wasn't technically raped, she was forced into this position by her family and the king.

I also felt sorry for her because it was clear the Boleyn family wanted her kept in obscurity. She was a walking impediment to Anne's marriage to Henry VIII. They had what was called an "affinity" because Henry had slept with Mary before he married Anne. It could have been considered incest. Henry received a dispensation to allow his marriage to Anne, but Mary was still a living reminder of that. She was seen as the black sheep and a bit of a failure because she hadn't made her mark. She was an embarrassment because of what she represented and her very existence reminded them she was the means to unseat her sister.

But you're sure Henry was the father of Mary's daughter, Katherine Carey.

You can trace a pattern of Henry maintaining Katherine financially throughout her life, making provisions for her to have a good marriage. And this is subjective evidence, but there's a portrait thought to be of Katherine that has a striking resemblance to Henry. I also found evidence in a poem written by Sir Philip Sidney to Katherine's granddaughter in 1582 that makes reference to hidden royalty.

If Sidney knew 60 years later, then wouldn't plenty of other people have known?

It was tacitly kept an open secret at court. Queen Elizabeth I did not acknowledge Katherine as her half-sister, but they were very close and Katherine served her devotedly.

Do you have the term "slut shaming" in England? Is that what happened to Mary?

Most writers who tried to portray Mary that way were from the nineteenth century on. There's no evidence that, at the time, she was publicly shamed. If that were the case, there would be so much more evidence. Henry was actually very prudish. He worked hard to maintain his image of a man of conscience and virtue. He did not parade his mistresses in public until Anne, and he felt that was OK because he planned to marry her. He had quite a few mistresses, quite a lively private life. There's evidence, though, that he was not the most adventurous of lovers.

Well, he was the king. He didn't really have to be, did he?

Of course being the king and so handsome and powerful was a heady combination and many women succumbed without a qualm. And maybe he didn't want Mary, maybe he wanted her sister Anne, or he saw in Anne a more sparkling version of Mary.

Some people say she didn't get anything out of it, in terms of money or position, but she got her rewards afterward. The affair ended in 1523. In 1528, Mary's first husband died. She had no home and nowhere to go. The king insisted that her father take her in, even though he didn't want to. He needed not to do anything more, but later that same year, Henry made her an annuity of £100, equivalent to £32,000 today, for the maintenance of their child.

A lot of Catholic writers wanted to blame the Boleyns for the English Reformation. They seized on any gossip they could find to undermine Queen Elizabeth, like the rumor that Anne Boleyn was raped at age seven. No scandal was too lowly to sling.

If you were going to write a novel about Mary, how would you portray her?

I would portray her as jealous of her sister. I haven't been able to finish reading The Other Boleyn Girl, but I did see the films, and she came across as insipid and colorless. I think she had a capacity for love, that she was a bit self-obsessed and that she was in the shadow of her siblings. Circumstances made her what she was. In a family where ambition was all, she was a failure. She was treated as though she was of little account. That comes across very clearly. And yet her second husband, William Stafford, mourned her for nine years. It was obviously a happy marriage. As Mary pointed out in a letter to Thomas Cromwell, she would rather beg for her bread with her husband than be the greatest queen ever imprisoned.

There's no evidence that she ever met Elizabeth. I do wonder what kind of relationship they had. Elizabeth remembered William Stafford from her childhood and was very affectionate with her Carey cousins. That could have been from Mary. I like to think so.