Wash. U. Scientists Reverse Effects of Type 2 Diabetes -- in Mice 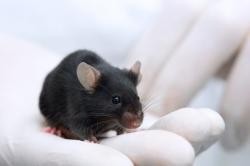 For most people, a diagnosis of type 2 diabetes means a lifetime sentence to a regimen of insulin and monitoring for some of the disease's nastiest side effect. But now a group of scientists at Washington University have discovered a way to make diabetes go away with a seven-to-ten-day treatment involving a compound called nicotinamide mononucleotide, or NMN. The treatment only works so far in black mice, cautions Dr. Shin-ichiro Imai, the associate professor of developmental biology whose lab ran the study.

The Imai lab came upon its discovery of the NMN treatment rather serendipitously, says Imai. The researchers' main focus has been aging and longevity, with a concentration on a protein called SIRT1, which regulates the metabolism in mammals. SIRT1 is activated by a molecule called nicotinamide adenine dinucleotide (NAD), produced by every cell in the body. One of the bi-products of NAD production is NMN.

"The idea we became interested in," says Imai, "is if we boosted NAD biosynthesis if it would enhance SIRT1."

Four years ago, the researchers were running a series of experiments on a group of mice that had been genetically engineered to produce reduced amounts of the enzyme that makes NMN. The results were interesting. "But," says Imai, "when we gave NMN to old control mice, we saw something really exciting."

In the normal course of events, 10 to 15 percent of mice develop diabetes as they age. But when the scientists injected NMN into the normal female mice, all signs of diabetes disappeared. (The results for the male mice showed a reduction in diabetic symptoms, but traces of the disease still remained.)

For Imai, the next stage of the experiment was clear: The researchers would investigate whether the NMN treatment worked on other forms of diabetes besides the age-related variety. So they took another group of younger mice and fed them what Imai calls a "Western-style" diet, comprised of 40 percent fat. For the record, says Imai, the mice loved it. (Who wouldn't?) Within two to three months, the males had developed type 2 diabetes. It took a little longer for the females, but at the end of six to seven months, they were diabetic, too.

But after seven to ten days of the NMN treatment, the female mice had made a full recovery. That is, both their glucose and blood lipid levels returned to normal, healthy levels. The NMN treatment also fixed the diabetes on a molecular level. (But again, the treatment wasn't as effective in the males. Imai is still trying to figure out why.)

Imai theorizes that the NMN enhanced SIRT1 levels, which improved the mice's metabolisms. "NAD biosynthesis is messed up by diet and aging," he says. "A deficiency in NAD biosynthesis leads to type 2 diabetes."

It helps that the body produces NMN naturally. Imai finds that preferable to injecting an artificial chemical. 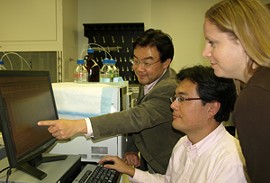 The study was published last week in the journal Cell Metabolism. Already, Imai says, he's received letters and e-mails from human diabetics volunteering to be part of another study, once the lab moves beyond mice. But that won't be for a few more years. First Imai wants to run a year-long study to see how the NMN treatment works over an extended period of time. The lab also has to develop a form of NMN that can be used in humans; the scientists have been working with a private company (which Imai declines to name). Then the researchers will inject the NMN into healthy human volunteers to make sure there are no adverse effects. And then they can finally work with the human diabetics.

Still, Imai is optimistic about the effects of NMN, not only as a treatment, but also as a preventative. "Preventing type 2 diabetes is equally important."