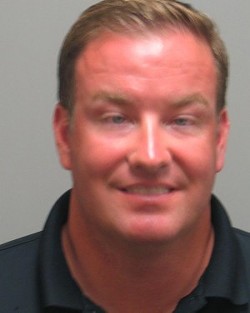 Cardinals' announcer Dan McLaughlin is fighting for his career after getting his second DWI in a little over a year last month.

Both arrests occurred in Chesterfield, and the police report from that first DUI in August 2010 paints a very unflattering picture of the Fox Sports broadcaster. According to the police report (viewable here), McLaughlin was heading east on Highway 40 when he was pulled over in his white Chevy Yukon around 10:45 p.m. on August 16, 2010.

The arresting officer, Daniel Dunn, noted in his report that McLaughlin's vehicle ranged in speed from 40 to 60 mph and weaved in and out of its lane on the highway. And though the rear windshield wiper was on, it was not raining.

When the officer asked for McLaughlin's license and proof of insurance, the broadcaster reportedly extended his hand and introduced himself by name. Dunn declined to shake his hand. He asked if McLaughlin had been drinking. "Not much," he replied.

After McLaughlin exited the vehicle, Officer Dunn noted that the suspect's crotch was saturated in the front and back. When asked about his wet shorts, McLaughlin said it was sweat. Dunn noted in his report: "he did not appear to be sweating anywhere else." (Ewww!)

From there the arrest grew all the more pathetic with McLaughlin allegedly telling Dunn, and another responding officer, that he had always been a big supporter of Backstoppers and the police. He allegedly offered to pay Dunn to let him go, reportedly saying: "I don't know what your name is but I'll do whatever you want. Here's my money."

Dunn reported that McLaughlin failed two field sobriety tests, "almost falling off the shoulder and into the grass" during one of the examinations. McLaughlin allegedly kept telling the officers that he lived just a block and a half away from where he was pulled over just west of 141 on Highway 40. In one of the times McLaughlin confused "block" with "month," saying he lived a "month and a half away," according to the report.

Dunn eventually handcuffed McLaughlin and took him to the station. Once there, Dunn says that McLaughlin turned from whiny to antagonistic. Didn't the police know who he was? Didn't they know that they would ruin his career?

McLaughlin declined to take a breathalyzer exam and called his attorney, Kevin McLaughlin (his brother?). Police then confiscated his driver's license and placed him in a holding cell with his bond set at $250.

Last November McLaughlin pleaded guilty to driving under the influence prior to being pulled over by Dunn.

H/T Former Town & Country alderman John Hoffmann who got the police report from Chesterfield and posted it online. Hoffmann has his own take on the arrest in his Town & Country newsletter. Among those insights: McLaughlin lives miles away from where he was pulled over and not just down the street as he told police.