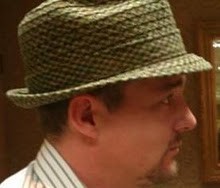 It's just not fair. As Rush Limbaugh, Ann Coulter and other speakers-of-the-truth have noted, the lame-stream media isn't criticizing Occupy Wall Street like they did the Tea Party. They're not calling the "occupiers" what they really are: a bunch of Nazis and trust-fund parasites.

Leave it, then, to St. Louis right-wing blogger Adam Sharp to take up the cause on the local level. Sharp, who's made a name for himself in recent years harassing KTVI reporter Charles Jaco and stalking an UMSL professor, infiltrated the OccupySTL movement last week in Kiener Plaza.

For those unaware, Sharp's M.O. is to point a camera at a person and then taunt them into doing or saying something unflattering that he can edit without context and place on his blog, sharpelbows.net.

In so doing, Sharp has come up with indisputable proof (below) that the Occupy movement is composed of "violent homophobic thugs" and those out to smear the Tea Party for being racially intolerant.

Here's proof of the homophobia, in which Sharp says an elderly man called him a "faggot."

And here's video of Sharp schooling OccupySTL demonstrators on how the Tea Party is not at all racist because once he, himself, chased a man with a swastika T-shirt from a patriot rally.

Finally, in this video clip Sharp pretends to be part of the Occupy movement in order to address/mock the crowd.

Actually, I got to give him points for that last clip. It shows some creativity. Meanwhile, fellow St. Louis right-wing blogger, Jim Hoft, is lapping up all Sharp's videos, writing on Gateway Pundit how the occupiers "harassed an independent journalist."