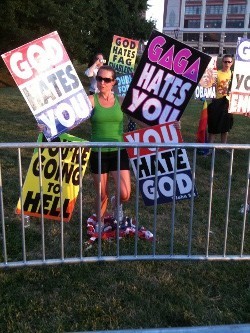 Whatever your thoughts are about the "God Hates Fags" mantra of the Westboro Baptist Church, it cannot be said that the organization does not know its rights and how to defend them in court.

Once again the controversial, Kansas-based church has won a legal decision in Missouri. The latest came yesterday when the United States Court of Appeals for the Eighth Circuit affirmed last summer's decision striking down the City of Manchester's funeral protest ordinance. In so doing, the court reaffirmed that peaceful pickets on public sidewalks near funerals are entitled to the protection of the First Amendment.

In recent years Westboro Baptist Church has taken to protesting outside military funerals under their belief that God is punishing U.S. soldiers for their country's tolerance of homosexuality. Manchester modeled its ordinance after an Ohio funeral protest statute that was found to be constitutional by a court in 2008. Yesterday's decision disagreed with that conclusion.

"Manchester's ordinance criminalized speech in a manner the First Amendment cannot tolerate," said Anthony Rothert, legal director of the ACLU of Eastern Missouri, which represented the church. "Allowing speech we find offensive in public forums is one cost of the freedoms that define America."

Gettin' All Religious Up in Here Politics See You in Court!