In Squirrel We Trust: Did Varmint Hex Phillies Pitcher? 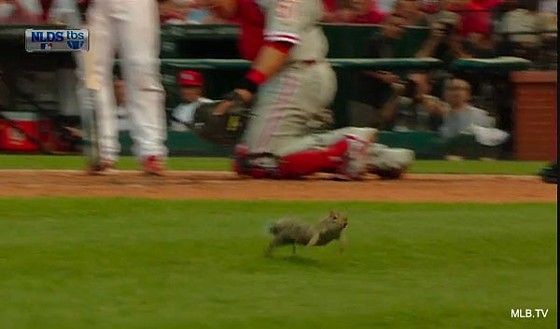 David Freese would tell you that his 4 RBIs last night on the way to the Cardinals' 5-3 victory over the Phillies in Game 4 of the NLDS came by way of hard work and some technological assistance.

After striking out in the 2nd inning, Freese went to the Cardinals clubhouse to watch video of his at-bat and make some adjustments. He then used the video prompts to go 2-2 at the plate with a two-run double in the 4th and a two-run homer in the 6th inning.

That's all fine and good. But here at Daily RFT we like to think that a varmint deserves at least partial credit for Freese's 6th-inning blast.

For the second time in two days, a squirrel (perhaps the same one?) momentarily interrupted play at Busch Stadium. Last night, the critter darted across home plate in the 5th inning just after Roy Oswalt delivered a ball to Skip Shumaker.

Immediately following the pitch, Oswalt argued with the umpire, asking that the ball not count because he saw the animal out of the corner of his eye as he threw. But the home plate ump wouldn't budge. The pitch counted.

Could it be, then, that Oswalt was thinking of the squirrel an inning later when he served a fastball over the plate to Freese?

After the game, Oswalt lamented to reporters: "I was wondering what size animal it needed to be to not have a pitch. I got distracted. I didn't really know that would be a pitch. If it ran up the guy's leg, would he have called the pitch for a strike? It's hard to say."

Phillies Manager Charlie Manuel suggested one way to deal with the menacing squirrel.

"Of course, being from the south and being a squirrel hunter, if I had a gun there, might have did something," said the Phillies skipper after the game. "I'm a pretty good shot."

Meanwhile, the squirrel says (via Twitter) that it hopes to make it to Philadelphia for Friday's night game and wreak more havoc.