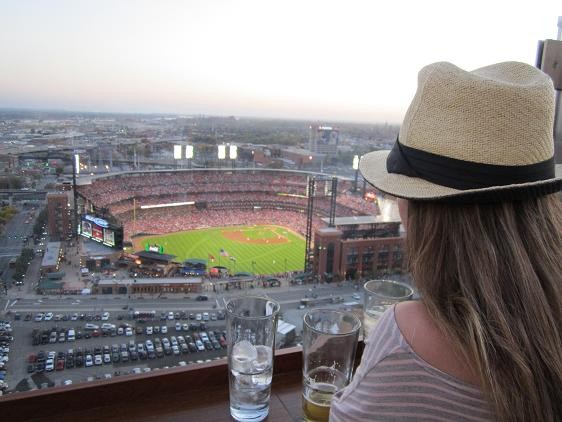 Those of you who follow me on Twitter know that my press credentials didn't get me the greatest of seats to Tuesday night's playoff game at Busch Stadium.

National media and legitimate sports reporters gobbled up the good seats in the press box (as they should), leaving this blogger to catch the game on TV in an adjoining break room and tweet about the beverage selections of my journalistic brethren.

I was all prepared to do it again Wednesday when, on my walk to the stadium, I felt the need for a beer and a bit more time enjoying last night's gorgeous weather. I ended up at Three Sixty atop the Hilton at the Ballpark, and all I gotta say is "wow!"

If you haven't caught a Cardinals game from this perch -- 26 stories up -- you're missing a helluva experience.

If I were to go again (which I definitely will), I'd perhaps bring a pair of binoculars. You can't quite see the ball from so far away, but you can definitely see the batter swing and the players move about the field.

What's cool, too, is that Three Sixty gives you the opportunity to catch each play twice -- once on the field and then again (after around a seven-second delay) when the play shows up on one of three large flat-panel TVs behind the bar.

Thanks to my new friends Whitney, Elise and Matt (from Philadelphia) for hanging out last night. Sorry, Matt, about the loss. Though I hope you're just as disappointed Friday after Game 5.

Below are a few more pics from last night. 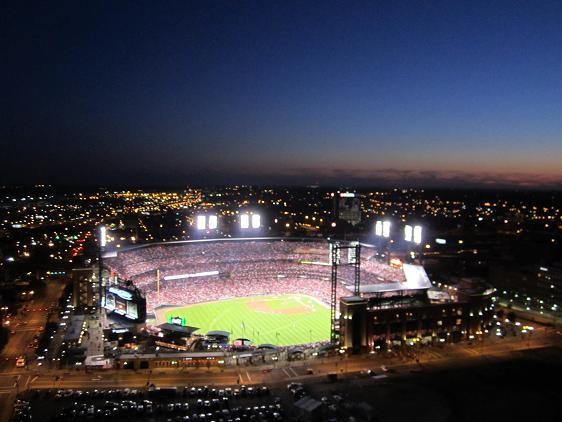