Why Mizzou Should Stay Put in the Big 12 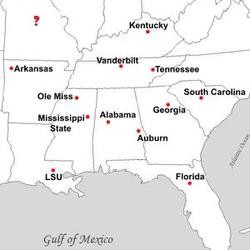 The University of Missouri Board of Curators emerged from a four-hour, closed-door meeting last night to announce that they'd unanimously approved a decision to allow the school to shop around for a new athletic conference.

Speculation is rife that the university will now leave the Big 12 for the Southeastern Conference. Yesterday, some Mizzou fans reportedly found the teleconference number for the Board of Curator's meeting and began chanting "SEC, SEC!"

Here's one Mizzou fan, however, who'd be chanting the exact opposite. The Tigers should stay put in the Big 12.

Why? For starters, the Big 12 has left its deathbed in recent weeks with the PAC-12 announcing that it's not looking to expand and with the University of Texas and University of Oklahoma agreeing to play nice and stay put in the conference. The Big 12 is now attempting to secure its survival by asking its member schools to sign over their media rights to the conference for the next six years. If a school leaves within those six years, it would forfeit its TV money for those years.

You'd think that Mizzou would be pleased to see such proactive actions on the part of the Big 12. Instead, it's using the changes to explore its options before signing on the dotted line.

Here's the thing, though:

At this point, it's unclear how much more television revenue Mizzou would generate with a move to the SEC. In my mind, though, the bigger question is what an SEC membership would do to the Mizzou football program. Would it elevate the Tigers' game, or would they join the SEC just to become the perennial doormat of the conference -- the Iowa State of the Big 12?

The SEC is widely regarded as the best program in the nation. Its teams have won the last five national championships. Currently, five of the SEC's twelve teams are ranked in the AP Top 25, with LSU and Alabama ranked No. 1 and No. 2. But the Big 12 is no slouch either. It actually has six teams among the Top 25 if you include Texas A&M, which is leaving for the SEC next year.

Moreover, I thought Gary Pinkel liked being in a conference that played Texas, Baylor and Texas Tech each year? Something like half of all players on the Tigers hail from Texas, and Pinkel uses the Big 12 affiliation to lure kids to the Show-Me State. "Hey, kid, UT passed on you? Well, how would you like to go down to Austin and kick their ass as a Tiger?" (Of course, it rarely works that way, but still.)

But beyond football, what happens with Mizzou's great basketball rivalry with KU? Yes, it's been a somewhat lopsided affair over the past 104 years (KU leads the rivalry 171 to 94), but it remains immensely fun -- a David v. Goliath tale -- when the two teams meet up twice each year.

Finally, with the exception of Vanderbilt, the SEC isn't exactly an academic powerhouse. Back when Mizzou was hoping to leave the Big 12 for the Big 10 last year, the argument being made in Columbia was that the Big 10 would boost the quality of admissions for the entire school. Will the SEC do that? Or with an influx of kids from the SEC, will NASCAR become the No. 2 sport on campus after football?