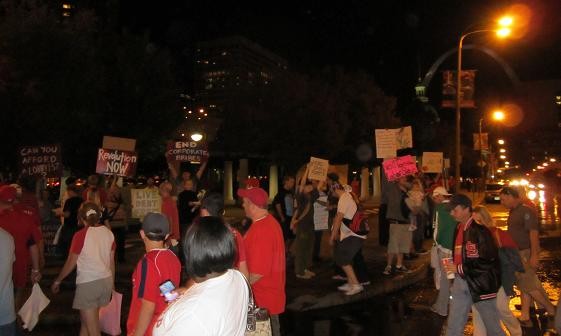 When we visited Kiener Plaza around 8 p.m. last night, a dozen or so protesters stood at the corner of 7th and Market showing off their handmade signs to baseball fans pouring out of nearby Busch Stadium. Among the messages displayed on the signs: "Revolution Now!" and "End Corporate Bribes!" A few feet away, in the amphitheatre in Kiener Plaza, a group of around 50 like-minded folks sat near tents listening to OccupySTL organizers rally the troops.

The cops told Daily RFT that they were waiting for their captain to make a decision on whether or not to enforce the park's 10 p.m. curfew for the first time since the protesters began camping out in Kiener Plaza on Saturday.

"They've been pretty peaceful, so the decision was made to let them carry on the last couple of days," one of the boys in blue told us. "Still, the curfew is something that is enforceable."

According to OccupySTL's blog, police finally swooped in around 5 a.m. today with some 15 police cars arriving on the scene and issuing a half-dozen citations. Protesters re-entered the park when it opened at 6 a.m. 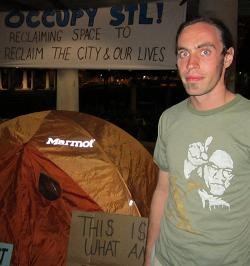 Ryan LeClair, one of the OccupySTL organizers, told Daily RFT last night that the police have been "fantastic" so far.

"They're part of the 99 percent of the population who we're out here for," says LeClair, a 27-year-old English and history major at UMSL. "They understand that this is about them as well."

But what, exactly, is OccupySTL about? That depends whom you ask.

LeClair says the movement here, like the Occupy Wall Street that inspired it, is about wresting control of government from corporations and giving it back to the people.

"People feel exploited and they're uniting," he says. "They don't feel it's right that the wealthiest 1 percent of Americans control so much of the nation's wealth and power."

It's unfair to call OccupySTL an anti-Tea Party movement because it's attracted people from all political stripes, says LeClair. An anti-greed movement may be more appropriate -- be it political, economic or environmental in ignoring climate change data.

In speeches last night, several of the organizers compared the movement to the peaceful protests in Tunisia and Egypt this past spring that ushered in regime change.

The obstacle, admits LeClair, is that the Arab protests had an easily defined goal of bringing down a dictator. The Occupy movement has yet to come up with a list of official objectives, but here is how LeClair sees them: 1) Get lawmakers to reform the current system, or 2) Scrap the nation's current economic model for something that's more egalitarian.

The protest continues today at Kiener Plaza, and according to organizers, will last as long as it takes. 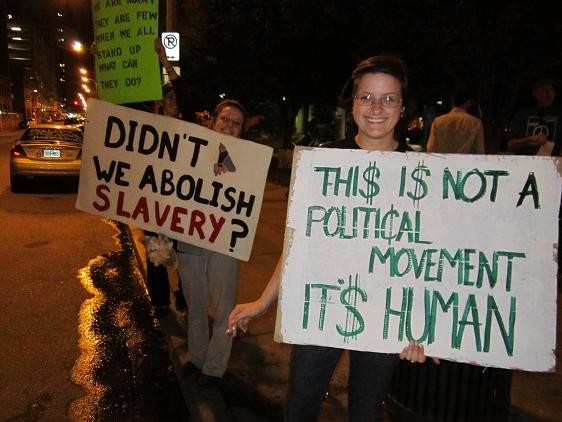