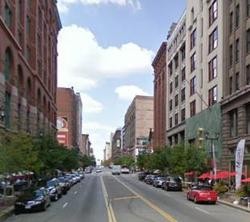 But in the eyes of the American Planning Association, the two roadways are on par this year, with both being named to the agency's Top 10 Great Streets for 2011. (The Delmar Loop and Clayton's Wydown won similar honors in 2007 and 2010, respectively.)

The APA writes of Washington Avenue:


Once mostly vacant and deteriorating, Washington Avenue today has reversed decades of urban decline to become one of St. Louis's most popular districts. This downtown corridor -- replete with residential and office lofts, boutiques, restaurants, and nightclubs -- pulses with activity not seen since its garment district days, a time when sidewalks were filled with window-shoppers and buyers. A virtual museum of late 19th and early 20th century warehouse architecture clad in brick, stone, and terra cotta, this monumental corridor imparts one of St. Louis's most cohesive vistas.