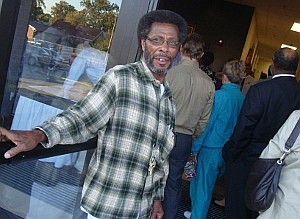 Most days for the past fifteen years, 57-year-old Tommy Simril has climbed into his 1989 Ford F-150 (the one with more than 200,000 miles on it) and cruised around his neighborhood of North Pointe, looking to catch a criminal in the act. Sometimes he's brought along his daughter, Ciera. Call it a bonding experience.

For as long as he can remember, Simril was more or less the neighborhood's only citizen sentinel during a period of heightened crime. Last year in North Pointe (the neighborhood where St. Louis Metropolitan Police Chief Dan Isom grew up) there were seven murders -- tied for second place among the city's 88 neighborhoods. Simril remembers not long ago when two kids caught up in a gun fight hopped the fence into his yard, looking for help.

Yesterday evening, Simril, who operates a lawn service, stood at the front door of Bishop Ellis Hall on the corner of Goodfellow Boulevard and West Florissant Avenue greeting neighbors and friends who've come to hear him and others speak about recent efforts to combat crime in North Pointe, which lies on the city/county border next to Jennings. Simril isn't much more than five and a half feet tall -- if that -- and he sports Armani eyeglasses, a green flannel and a boisterous charm.

"Ms. Crisp, how's it going? I just saw you in the paper," Senril chirps, opening the door for a woman in a green jumpsuit. Another woman gives Senril a hug and calls him "baldy" -- a facetious reference to his short-cropped afro. "Hey, there's my man Alderman Carter, he taught me everything I know," the patrolman says, waving to his mentor, Greg Carter, with whom he has a direct line of communication.

These days, Simril has had more reason to smile. Gone is the era when he constituted the neighborhood's entire lookout brigade. Now he has eight more people helping him out in his new citizen patrol.

The added lookouts are part of the city's much-hyped Neighborhood Ownership Initiative, whereby citizens are dispatched to be the eyes and ears of law enforcement in an enhanced effort to snuff out crime. The initiative began in Lafayette Square two years ago and was later adopted by Tower Grove and Dutchtown; it's now spread to various neighborhoods in all corners of the city and been covered by multiple media outlets, including Daily RFT. The Post-Dispatch ran an A1 story on the program yesterday. In addition to a beefed-up citizen patrol, the model places heavy emphasis on victim advocacy and support, as well as "impact statements," which are signed documents delivered to judges during bond hearings in order to keep suspects in jail.

So far, Simril sees the intiative working in North Pointe. "911 calls are down, and we're cleaning up the the intersections," he says. "There's not as much loitering, and there's not as much litter in the alleyways." Sometimes he doesn't even have to climb into his truck and cruise the streets; he can sit by his phone at home and play the role of dispatcher.

"His block is the cleanest block in the city," says Neighborhood Stabilization Officer Mark Minden. "Whenever someone moves in, he'll visit them and explain the rules and regulations."

Inside a packed Bishop Ellis Hall, the assembly takes on a rah-rah atmosphere. It's sponsored by the office of Circuit Attorney Jennifer Joyce. Several city leaders are here to trumpet the benefits of community vigilance and preach the message to visitors from other neighborhoods.

Simril is one of the first to speak. He says his once-futile quest to clean up the streets is finally paying off. Lewis Reed, president of the Board of Alderman, offers a few poignant words about the murder of his fifteen-year-old brother in 1981. "No one came forward out of fear," he says. "... But there are more of us then there are of them." Circuit Attorney Joyce, Mayor Francis Slay, Chief Isom and Judge Steven Ohmer praise the audience for doing their part. Alderman Greg Carter riles up the crowd with a preacher-like pep talk. "Aren't you tired of the guys hanging out front?" he roars. "Aren't you tired of peeping out your window checking on your car? And you know you know the people who are selling drugs." The crowd loves it.

Mike Petetit, a citizen who first launched the neighborhood ownership model in Lafayette Square, is honored with a hero's award from Alderman Carter.

Not everyone is fully won over by the initiative. "It's still too early to tell," says Sylvia Donaldson, a member of the victim-support and impact-statement groups, though she remains optimistic.

After the speeches, various volunteers saddle up to tables in the back to recruit more troops. Behind the citizen patrol table stands 24-year-old Ciera Simbril, Tommy's daughter -- the one he'd lumber around with in the F-150 when she was a young girl.

Ciera, clad in a suit, is twirling a playful key chain that reads "I have PMS and a gun. Did you have something to say?" She praises her father. "My dad is extraordinary," she says. "And he will do anything to serve his community and protect his family. He'll become a bulldog on you."

Then she turns her attention to a resident who says she fears retaliation from thugs if she were to sign up as a volunteer.

"There's always a concern for retaliation, but they don't stop by my house because they know I'm going to call the police," says Ciera. "I've taught them to be scared of me."

Scared of the F-150 parked in the driveway, too.