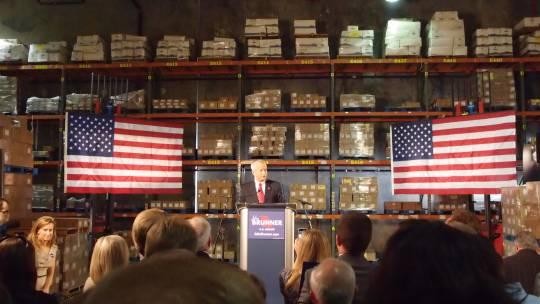 Updated 11:30 a.m. to show that FEC guidelines do not make a distinction between money spent from contributions and money spent out of pocket when it comes to campaign disclosures.

John Brunner officially announced his candidacy for U.S. Senate yesterday. He stood behind a podium in a warehouse, a corridor of towering stacks of boxes funneling the fifty or so attendees into a dense pack of smiles and campaign signs. The warehouse, in St. Charles, is the distribution center for Vi-Jon, the health-care product company he owns.

"I know what pundits and elitists will say," he told the crowd. "'This guy doesn't have any experience or qualifications as a politician."

He pauses for two seconds.

The crowd laughs, cheers and claps.

"I'll match my experience as a manufacturer and a job creator against a career politician's resume of borrowing and spending anytime, anywhere."

Yesterday's announcement marked the first time Brunner has outlined his stance on specific policy issues. There was nothing surprising, though, as he echoed the positions pretty much every serious Republican candidate has taken in this election cycle: no tax increases, less government spending, the stimulus was a failure, we need a balanced budget amendment and repeal of the Affordable Care Act, which, in a creative twist, Brunner termed "Obama-Claire."

When asked if he would sign the No-Tax Pledge, which most Republicans have done, Brunner answered, "Yeah, taxes are not the problem. It's the spending."

When asked if he would compromise with Democrats on a debt-reduction deal that included $10 of spending cuts for every $1 of tax raises, he said, "We've gone back through that ten, fifteen, twenty years on these kind of deals. We've just got to get serious and understand that we do not have a revenue problem, we have a spending problem. So it's a matter of getting up there, sitting down, and saying, 'Let's deal with the spending problem,' and then determine what kind of revenue stream we need to make that budget. But without a budget, we shouldn't do anything."

With the race winding up, it is still unclear how the three Republican candidates differ on policy issues. This ideological overlap may favor Brunner, as it forces voters to look at the peripheral differences between the candidates. And with Congress's approval rating at an all time low, Brunner's Outsider Status and Job Creator Experience may be the key distinctions. He knows this, and he is making it the centerpiece of his campaign.

"Once I get my message out, in terms of my background and experience, especially in these difficult times, the citizens of Missouri can compare and say, 'Well who's the guy that has actual business experience, industry experience and commerce experience?'" he told reporters a few minutes after the announcement. "And I really believe that if we get somebody with that kind of background into Washington, we can make the changes faster."

Brunner had made no secret of his plans to enter the race. He mentioned it as early as May. So his decision to officially announce today, the first weekday of the new fundraising quarter, appeared strategic -- any of his expenditures before October do not have to be filed until the end of January.

Accordingly, last week the Missouri Democratic Party filed a complaint against Brunner with the Federal Elections Committee, claiming that "for more than five months, he has conducted an active campaign while making none of his required filings." The complaint states that Brunner has been publicly introducing himself as a candidate and has spent a decent chunk of money, so he should have had to abide by the campaign finance rules that come with being a candidate -- namely, disclosing who has been donating money.

John Hancock, Brunner's political adviser, countered by asserting that, up to this point, Brunner has only spent his own money, which he said does not have to be disclosed until Brunner's first filing as a candidate (in January).

According to FEC guidelines, once an individual begins campaigning he must register as a candidate after spending or raising $5,000. The guidelines state that a candidate crosses the line from "testing the waters" to "campaigning" once he decides, in his mind or behavior, to run.

It does not make a distinction between money spent from contributions and money spent out of pocket.