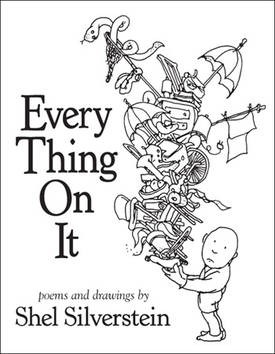 Go the Fuck to Sleep is back on the bestseller list, and all is right with the world. But allow us to indulge in a wee bit of nostalgia this week for the time when we were very young people who had to be told to go the fuck to sleep. In those days, our parents relied on the works of Shel Silverstein to calm us down. A Light in the Attic and Where the Sidewalk Ends were our first exposure to poetry, apart from nursery rhymes. To this day, we think of Sarah Cynthia Sylvia Stout whenever we don't feel like taking the garbage out.

We were unaware of his other career as a cartoonist for Playboy. One of his earliest books, Uncle Shelby's ABZ Book, published in 1961 was the Go the Fuck to Sleep of its day; his publisher wisely appended "A Primer for Adults Only" to the title so it wouldn't fall into the wrong hands. (Maybe the publisher of Go the Fuck to Sleep should take that under advisement, though you'd think the title would be warning enough. Subtlety is lost on some people.)

Silverstein died in 1999, but two weeks ago he -- or, rather, his executors -- came out with a new collection of poetry, Every Thing On It. It's currently fourth on the children's/YA bestseller list. The title is a tribute to the hot dogs of Chicago, Silverstein's hometown:

I asked for a hot dog
With everything on it,
And that was my big mistake,
'Cause it came with a parrot,
A bee in a bonnet,
A wristwatch, a wrench and a rake.

No celery salt, though.

1. Trick of the Dark by Val McDermid
2. Go the Fuck to Sleep by Adam Mansbach and Ricardo Cortés
3. Plugged by Eoin Colfer
4. The Night Circus by Erin Morgenstern
5. The Sookie Stackhouse Companion by Charlaine Harris
6. Winter's Bone by Daniel Woodrell
7. Before I Go To Sleep by S.J. Watson
8. The Paris Wife by Paula McLain
9. Jacqueline Kennedy: Historic Conversations on Life with John F. Kennedy by Caroline Kennedy and Michael Beschloss
10. Noir at the Bar by Jedidiah Ayres and Scott Phillips

1. Earth Mother by Ellen Jackson, Leo Dillon and Diane Dillon
2. Down the Mysterly River by Bill Willingham and Mark Buckingham
3. Goliath by Scott Westerfeld
4. Every Thing On It by Shel Silverstein
5. The Hunger Games by Suzanne Collins
6. What Was I Scared Of? by Dr. Seuss
7. Uglies by Scott Westerfeld
8. Miss Peregrine's Home for Peculiar Children by Ransom Riggs
9. Floyd and the Future Frog: Adventure Is Just a Text Message Away by Paul Cook and Norm Daniels
10. Shelter by Harlan Coben