Opponents of Red-Light Cameras Rally for the Cause 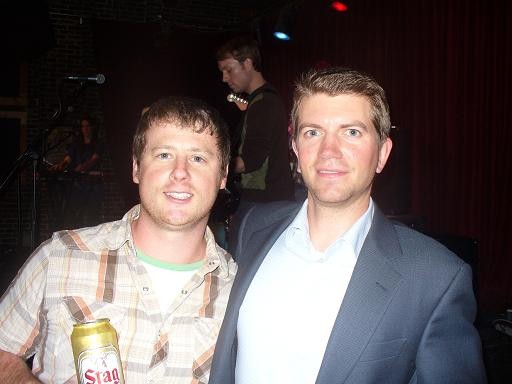 Daily RFT stopped by the Off Broadway last night where opponents of red-light cameras were hosting their "Stop the Scameras" fundraiser.

State senator Jim Lembke, the emcee of the evening who's fighting his own red-light ticket in St. Louis, was already gone by the time we got there. Still, a smattering of folks were still present, including musician Jesse Irwin who, along with Ed Martin, first launched an organized drive to ban red-light cameras in Missouri back in 2009.

Also on hand was organizer Matt Hay, of the website wrongonred.com, and attorney Ryan Keane, who this year has filed lawsuits against Florissant, Hazelwood, Ellisville, Kansas City and Creve Coeur to get rid of cameras in those municipalities.

Money raised last night will go toward funding the pro-bono work of attorneys fighting to repeal camera ordinance in Missouri. Opponents of the cameras are eagerly anticipating a hearing next week in front of the Missouri Court of Appeals in which Clayton attorney Bevis Schock will argue a case brought against Creve Coeur. Schock is defending a woman who was threatened with arrest for not appearing for a court date regarding her red-light ticket.

"We're optimistic that that suit will get to the Missouri Supreme Court and settle the issue once and for all," says Keane.

In addition to music from Irwin, the bands Old Capital Square Dance Club (below) and Spectator rounded out the evening's entertainment.