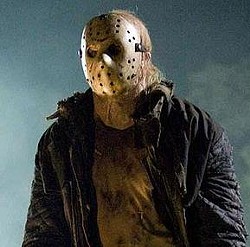 Police in Dellwood say they have a possible lead on the man who dressed like a character from a slasher film Sunday and robbed a home for mentally-disabled adults.

He's the person hiding out with a thousand dollars in torn and scribbled currency.

"Apparently the victim ripped all his money in half and wrote his name on the torn-up bills," says Dellwood police chief Fred Haunold. "We've notified all the banks in the area to be on the lookout for any currency matching that description."

According to Haunold, the suspect wore a black overcoat, knit hat, gloves and an old-time hockey mask when he burst into the home late Sunday night in north St. Louis County. Haunold says it's unclear whether the suspect intended to resemble the Jason character from the Friday the 13th horror franchise. "It's more likely that he wanted to hide his identity and the shotgun he carried with him into the home," speculates Haunold.

The police chief tells Daily RFT that his investigators believe that the intruder knew that the victim, one of three mentally disabled adults living in the home, had money on him when he burst through the door around 10:45 p.m. September 25.

"He said something to the effect of: 'Where is the big guy at?'" says Haunold. "He then located the victim's room and ran off with a small safe containing the money."