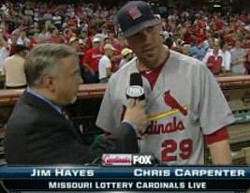 The Cardinals' improbable entrance into the playoffs yesterday wasn't just one for the MLB record books. It was also a record-setting day for St. Louis television.

At the risk of stepping on Dan Caesar's toes, Fox Sports Midwest just tweeted Daily RFT to report the news: Yesterday's Cardinals-Astros game was the station's most-watched production in its 18-year history of broadcasting Redbird games.

Last night 18 percent of St. Louis area households were tuned into the game at any given time. Geoff Goldman, spokesman for FSM, describes last night's contest as a "perfect storm."

"The season came down to the final games and the city was clearly energized," he says.

This year, FSM broadcast 148 regular-season Cardinals games, which reached an average of 9 percent of the TV households in the market over the season. In all of baseball, only the Philadelphia Phillies cable network garnered a larger percentage of viewers.

So what were are the five most-watched regular-season games ever on FSM? Glad you asked. We just so happen to have the answer: