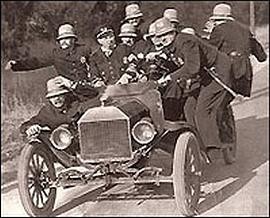 The St. Louis police department mirrored the Keystone Kops last night in a bizarre chase that began in a south-city convenience store.

As stltoday.com reports, three gunmen entered the 7-Eleven at Chippewa and Brannon last night and fired shots into the air before making off with the cash drawer. The suspects then robbed a man near Bates and Tennessee, again firing shots into the air.

Police caught up to the suspects' red Impala near downtown and gave chase, with the perps eventually driving down the train tracks near the Amtrak station before getting their vehicle stuck. The men then fled the car.

One of the men was arrested a couple blocks away. Officers put him in handcuffs and tossed him into an empty police cruiser as they attempted to round up his accomplices. Then things got really interesting.

The arrested suspect somehow managed to get his hands in front of his body and slide into the driver's seat. He then took off in the police car, reportedly using his legs to steer the vehicle. He crashed the police car just north of downtown and then robbed another vehicle as a person was getting into a car along Washington Avenue.

This time the wily crook was able to get all the way up near Crown Candy Kitchen before crashing the vehicle in the 2700 block of Hadley and once more getting arrested.

Police say no one was injured in the car crashes or shootings the accompanied the suspects' crime spree.