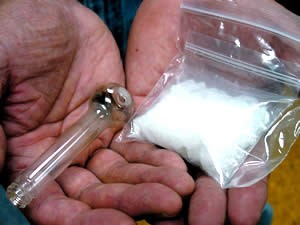 Here's yet further proof that Missouri lives up to its billing as the "Meth Capital of the United States": A kindergartner in western Missouri recently brought his mom's crack pipe and $3,700 worth of crystal meth to his school's show-and-tell.

According to KCTV, the boy was told to bring important family items to share with his classmates September 6. Teachers and authorities in the small town of Sweet Springs (roughly halfway between Kansas City and Columbia) say they couldn't believe what the child then pulled out of his backpack.

"When I called the prosecutor about it, they said, 'You're kidding me, aren't you?" Sweet Springs Police Chief Richard Downing tells KCTV.

The boy's 32-year-old mother was charged with possession of a controlled substance and child endangerment. The boy is now in the custody of "loved ones" after mom posted $7,500 in bail Monday night. She's now getting treatment for complications from a recent gastrointestinal surgery.

Yep, we imagine that your child bringing your drug stash to show-and-tell could cause the ol' acid reflux to flare up again.