Jeff and Mary Clarke: Model Scouts Object to Nightline Report on the "Dark Side" of Modeling 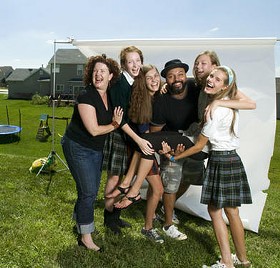 This week is Fashion Week in New York City, which does not mean Missoni at Target as it does here, but instead tall, skinny girls walking down runways showing off the designer clothes that will hit stores next spring. ABC's Nightline seized the moment by running a special last night that focused not on the clothes, but on the girls that wear them, called "A Not So Glamorous Model Life."

Among the villains plaguing these poor young innocents are the modeling agents that pay them next to nothing and force them to live in communal apartments, photographers who demand hand jobs in exchange for work, a sleazy club promoter named Isaiah who lures the girls into the bedroom of his SoHo apartment with the promise of a free meal (to supplement those meager earnings)...and Jeff and Mary Clarke, a husband-and-wife team of modeling scouts who run an operation out of their Dardenne Prairie, Missouri, home called Mother Model Management that Nightline portrays as a cross between America's Next Top Model and a gulag.

Riverfront Times also ran a feature on the Clarkes and their most famous discovery, Karlie Kloss, back in 2008. We saw the Clarkes as warm, supportive and protective of their clients, even the ones who decided to quit modeling. They also gave the girls food. It was quiche -- and no one threw up afterward.

In the Nightline segment, three teenage girls come to live with the Clarkes. They exercise a lot, subsist on a diet of steamed vegetables and egg whites (cue a shot of young Malia begging for bread), practice walking and posing, and live in terror of the measuring tape. At the end, one girl will be carried off to a glamorous (and dangerous!) career in New York. The other two will be sent home.

In between scenes of the girls' suffering, the Clarkes cruise the Delmar Loop and local shopping malls "stalking" potential (underage) models. They are mostly ignored and, in one case, coldly rebuffed by the mother of a girl who appears to be eleven or twelve. Afterward Jeff confesses to feeling bad for the girl: "Maybe in her heart she had a dream to be a model."

The denouement: Gwen's hips are half an inch too wide. Malia is still uncomfortable in front of the camera. Hayley is the chosen one! (And watch Malia's envious sideways gaze after a photographer advises her to ask Hayley for tips. Is she plotting sabotage?) The lucky sixteen-year-old gets to go to New York City to live in a spartan model apartment, make sexyface for photographers twice her age and get hit on by the club promoters every time she sets foot in the SoHo neighborhood. Her father gives her a bottle of pepper spray to hide under her teddy bear.

In the New York segment, we also get to follow another of the Clarke's discoveries, Ehren Dorsey, formerly of St. Charles, currently poor and starving, who eventually succumbs to the promoters so she can get a free meal.

Like the rest of the country, the Clarkes finally watched the special last night. Like a lot of viewers, they were horrified by what they saw, and for the same reasons: What Nightline showed did make the modeling industry look pretty bad. But they also felt betrayed by ABC and reporter Dan Harris.

"We were told they found our approach refreshing and our girls 'truly special' and it would be a pleasure sharing it with the world," Mary wrote on Mother Model Management's blog this morning. "The story has been told a million times....the 'seedy, dark side'. What you look for, you find....We could not, and would not, be involved in this industry if that was what we and our models have experienced. It couldn't be farther from our reality." 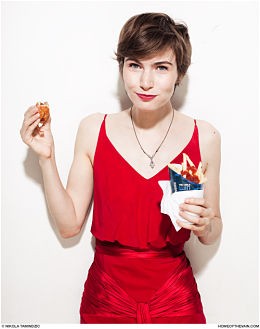 Jenna Sauers, a former model and current blogger for Jezebel who has been highly critical of the modeling industry, happens to have been a client of Mother Model Management. She defended the Clarkes in the comments section of Jezebel's report on the Nightline piece:

For whatever you think my opinion is worth, the Clarkes are some of the most honest people I have met in what can be a challenging (and, uh, shall we say somewhat morality-challenged) industry. They work hard to prepare the boys and girls they represent for the realities of the industry they'll be working in, and I know they work hard to protect their models' interests. Anyone who's familiar with my writing knows I have had occasion to say some pretty bad things about a lot of people I've encountered through modeling. But the Clarkes are absolutely not among that group.

Mary Clarke points out that the diet and exercise regimen she puts her potential models through is not that much different from the one practiced by most high-school athletes (some of whom, incidentally, get weighed a lot, too). And even though Harris is shocked -- shocked! -- when Ehren Dorsey tells him she can get into a party at a club without being carded, wouldn't she find the same sort of thing -- including the free-flowing alcohol and the predatory guys -- at a college frat party? (There's a reason freshman girls are described as "freshmeat.")

Interestingly, the New York Times ran an op-ed piece today by Ashley Mears, a sociologist who just published a book about the industry, Pricing Beauty: The Making of a Fashion Model. Mears is also a former model. In her editorial, she argues that the biggest problem facing models is not the sleazy club promoters but the fact that all modeling is freelance work. Like freelancers in other industries, the models are never quite sure where their next jobs are coming from. Because there's no modeling union, they're powerless against agents who take a large chunk of their paychecks (far more than the Clarkes' comparatively modest ten percent) and force them into a form of indentured servitude and clients who pay them in clothes instead of cash. (Sauers has also written about the economics of the modeling industry.)

"Empowering models as workers could potentially help them stand up against other aspects of the industry, like unhealthy expectations about dieting," she writes. Another former model, Sara Ziff, is organizing a union for models to fight for better workplace protection.

But, of course, a story about worker rights wouldn't be nearly as sexy -- or as camera-worthy -- as one focused on a club promoter showing off his bedroom and iPhone full of models' phone numbers or a pretty woman tearfully recounting how she was once forced to give a photographer a hand job or a doe-eyed fifteen-year-old begging for a slice of bread.

Daily RFT has a call in to Mary Clarke for more of her take on the Nightline segment. (She's in New York now for Fashion Week. So, she reports, is Gwen, one of the girls who got "cut." They watched the special together.) We'll update this blog post when we hear back from her.