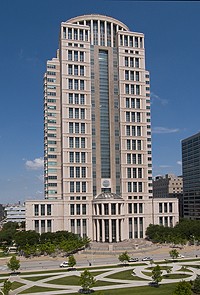 It's been described as a "seventeen-story waterfall." But technically the cascade was twenty stories long, seeing how the leak originated on the seventeenth floor of the downtown St. Louis skyscraper and ended in a giant puddle three floors below the building in the parking garage.

Now the U.S. General Services Administration, owner of the Thomas F. Eagleton U.S. Courthouse, is awaiting the repair bills. Jim Woodward, clerk of the federal court and the person responsible for overseeing the renovation of the building, says he anticipates a bid back this week from a Kansas City contractor. The price tag is expected to be a biggie, somewhere between $5 million and $6 million, according to Woodward.

The leak began around 10:30 p.m. August 23 behind a wall in a prisoner holding cell a little more than halfway up the 29-story skyscraper. Woodward says that it's anyone's guess how much water escaped by the time a maintenance worker discovered water pooled in the basement parking garage at 5 a.m. the next morning. The water damage has now left the court operating without the use of seven of its sixteen courtrooms.

So, whom to blame for the mess and its cost?

Woodward says that the source of the leak was a misaligned pipe that became disconnected from its fitting. "That was the result of improper installation eleven or twelve years ago when the building was under construction," says Woodward. "So somebody who was supposed to do a good job with that didn't, and it took eleven years to pull loose."

Still, weren't there guards in the building who should've noticed the deluge?

"There are guards in the building 24 hours a day, but I can't really say they weren't doing their job. The fact is there is no alarm monitor on the building's water flow -- at least in that particular area of the building."

The Eagleton was completed in September 2000 at the cost of $210 million. It remains the largest federal courthouse in the nation at nearly one million square feet.

"With a building this size you can't expect guards to be poking their heads in all the right places when something like this occurs," says Woodward, who's hoping the building will get a water alarm following its renovation.

Woodward says that by the time the water reached the tenth floor it moved out toward the exterior walls and made its way down the side of the building, limiting damage on lower floors. The courtrooms ruined by the water had damage to their ceilings, floors and ornate wood-paneled walls.

The GSA plans to renovate the courtrooms to the same finishes as when they were built. Two of those courtrooms could reopen in four to six weeks. Others won't open until next spring.

Woodward says that the GSA is monitoring for mold in the building and has found "minimal amounts" of mold spores and no dangerous levels of the fungus.