Flight Grounded at Lambert Due to Backgammon 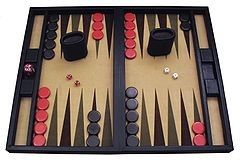 Perhaps a little too quiet.

According to the St. Louis Business Journal, three Israelis of Russian descent were on the flight. Their English skills were crude (red flag much?). Plus they acted weird:

But no one was prepared for what came next. No one. As KSDK Channel 5 reports:

Flight attendants grew further suspicious after seeing one of the men handle an elaborate, odd-shaped case...The box was revealed to contain a backgammon game.

Ground the plane. Seriously -- backgammon? Do you know what "backgammon" means, in the game? It means a triple loss of checkers. So. Do the math.

By the way, advice to terrorists: If you really want to look normal, don't bring a social and stimulating past-time. Put on headphones and avoid eye contact with strangers, just like everybody else.

The flight was grounded at Lambert Airport on Tuesday morning. After a sweep of the plane and a re-screening of the passengers, the flight resumed as normal.