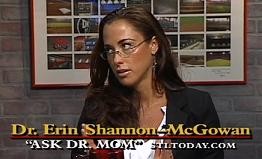 Update: OMG! Alert readers are now telling me that Erin Shannon-McGowan is the daughter of Cardinals broadcaster Mike Shannon, who happens to be a KMOX (1120 AM) colleague of Brennan. No wonder Brennan didn't return my inquiries asking him to explain how/why he chose "Ask Dr. Mom" for last week's Donnybrook. Nepotism is difficult to justify.

So, who can we expect on Donnybrook this week, Charlie? How about Jack Buck's widow, Carole? She's a "journalist." I hear her all the time on KMOX warning people about an "out-of-town funeral home conglomerate."

What a joke. Martin Duggan, come back and save your show.

A few months ago Daily RFT reported on a pissing match between AM talk show hosts in which McGraw Milhaven (KTRS AM 550) accused Charlie Brennan (KMOX AM 1120) of blackballing guests from appearing on his show. Beyond that, Milhaven had a beef with Brennan over the way he managed the popular television show Donnybrook on KETC-TV (Channel 9).

Brennan serves as the host ("provocateur") for the weekly round-table program, which, according to KETC, features "five quick-witted, highly opinionated St. Louis journalists."

Milhaven wondered why Brennan had never invited him to sit in as a substitute talking head on Donnybrook. Responded Brennan: "..the show is short on women and conservative voices. So when we have an absence, I try to find someone who fits that mold."

Okay, but here at Daily RFT we're still baffled as to how Brennan settled on Erin Shannon-McGowan on last week's program. Sure, she's a woman. A conservative? We don't know. But she most definitely is not a journalist.

She is a clinical psychologist who occasionally answers questions presented to her by Aisha Sultan, home and family editor for the Post-Dispatch, in a video feature called Ask Dr. Mom. Topics Sultan and Shannon-McGowan have explored include: how to wean your child, how to get your child to do chores and what to do when your child gets the "mean" teacher at school.

We suppose, then, that you could call Shannon-McGowan a "news" source. But a journalist? No.

We're not sure what Brennan calls Shannon-McGowan, only that he called her for last Thursday's show. Brennan has yet to respond to Daily RFT's request for comment.

We will say this, for Shannon-McGowan: Seated with Brennan, Ray Hartmann, Bill McClellan and Alvin Reid, "Ask Dr. Mom" sure made the show more visually appealing. Then again, if Donnybrook were a beauty pageant, it would've been canceled after its first airing. (It's no wonder all the regular "journalists" on Donnybrook work in print and/or radio. Just sayin'.)

Perhaps the problem is that Brennan just doesn't know any female reporters who actually follow and report on the news. Allow us to offer a few suggestions:

1. Jo Mannies at the St. Louis Beacon
2. Julie Bierach with St. Louis Public Radio
3. Elizabethe Holland at the Post-Dispatch
4. Audrey Spalding, blogger/researcher at Show-Me Daily
5. Or, heck, how about RFT's own Sarah Fenske?

Just a few thoughts in the off-chance that the Donnybrook provocateur ever trolls Daily RFT looking for topics that might provoke.