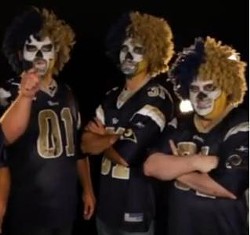 Apparently going to a Rams game this year is a big costume party, if you believe that the "fans" on the team's television commercials (dressed as Elvis reenactors and clowns in blue-and-gold wigs) resemble the people you'll see at the Edward Jones Dome.

But it's not enough that these "fans" just look ridiculous. Evidently, they are also ridiculously ignorant to the game of football. Thus the Rams this season have employed a video played on the JumboTron informing "fans" when to cheer.

Here, then, are the five "Ram Rules" on the Dos and Don'ts of cheering:

InsideSTL.com has a copy of the video. DO check it out, but please do NOT applaud until the end.