PARK(ing) Day to Turn Spaces Into Parks This Friday

If you're downtown Friday and looking for a place to park on 8th Street between Olive and Pine, well, better keep driving: From 7:30 a.m. to roughly 3:30 p.m., the stretch of metered parking on that block is becoming a series of pop-up parks.

The PARK(ing) Day phenomenon began in San Francisco six years ago, when a local art-and-design studio called Rebar took over a single parking space in that city's downtown. The goal: to challenge people to think about how public streets are used in their city -- and what cool things they can do with just a little bit of space.

Since that inauspicious beginning, PARK(ing) Day has spread to six continents. Last year there were more than 800 installations, in 180 cities in 30 countries.

This year, for the first time, St. Louis will be officially among them.
That's not to say no one in St. Louis participated in year's past. Jennifer Allen, who works as Trailnet's active transportation manager and serves as coordinator of this year's event, says that some people took it upon themselves to celebrate here -- including the architecture/design firm Arcturis, which created a nifty park indeed (see photo above).

But this is the first organized city-wide effort, and even city hall is on board. "The planning department really loves ideas like this," Allen says. And the treasurer's department waived fees for the group: "They've been very supportive."

As for potentially grumpy downtown commuters who've gotten used to parking on Olive, Allen is unconcerned. They will, after all, have some cool new parks to check out -- none of them any bigger than the size of a parking space -- along with, yes, food trucks, who'll be set up nearby. A slight inconvenience, perhaps, but something of a nifty community event. "We're not really anticipating a lot of flack," she says. 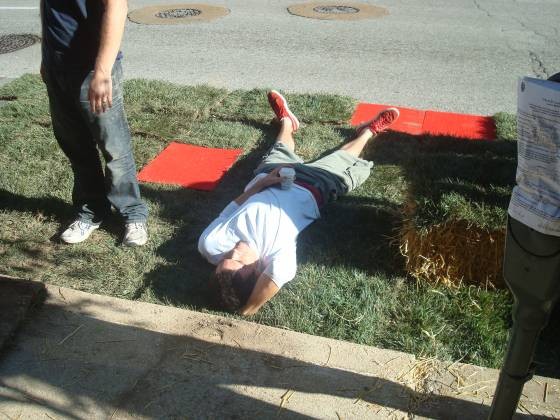 If you're downtown Friday, you're encouraged to stop by. And if not, you have every chance to take matters in your own hands. Allen's group is encouraging people to make their own PARK(ing) space park -- whether with permission of the municipality in question, or simply by setting up shop and feeding the meters until you're ready to leave. (Freelance park designers are encouraged to register their park with the Livable St. Louis Network website -- what's the point of doing something super-neat if no one else knows where to find it?)

Such public spaces, no matter how small, have an impact on a city, Allen says. "It makes such a difference in terms of our quality of life. It's amazing what you can do with a little bit of space -- to liven it up and attract people to it."

Allen actually participated in a PARK(ing) Day event in Los Angeles a few years ago before back to her home town of St. Louis. She's convinced our city is ready to transform parking into PARK(ing). "I'm still so impressed with how great an outdoor culture we have," she says. "When you see the events we have outside, and things like Citygarden, it really shows the power of having great public spaces and what that can do for a community."