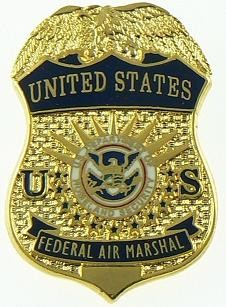 "In an abundance of caution, the crew elected to have the airplane re-screened," says Johnson. "Unrelated to the re-screening, prior to departure, two customers on board chose not to fly and deplaned normally. The flight operated safely and routinely and arrived just over an hour late."

Johnson said he could not confirm Meyer's statement (below) as the airline does not comment on customer or security matters.

Update 1 p.m.: Ron Meyer, the passenger on United flight 3681 who first alerted Breitbart about the fake air marshals called Daily RFT this afternoon to stand by his story. Meyer says that a flight attendant got on the plane's PA system and told passengers that the men escorted off the plane claimed to be federal air marshals but could provide no documentation.

In addition, Meyer says that when the plane landed in Washington D.C. the pilot told him inside the terminal gangway that the men turned out to be real federal air marshals.

Reached this afternoon, a TSA spokeswoman would not comment further on a statement the agency put out this morning (below).

"I think it's awkward and odd the way they're spinning this," says Meyer. "It seems pretty embarrassing from a national security perspective."

Update 10:45 a.m.: The Transportation Security Administration today released a statement saying there was no security threat on United flight 3681 last night and no fake federal air marshals. The flight returned to the gate at the pilot's discretion.

Per TSA: "United #3681 from St. Louis International (STL) to Washington Dulles (IAD) returned to the gate at the direction of the airline, and all passengers were rescreened at the request of the pilot-in-charge. All passengers were screened with negative findings,  and the plane departed for IAD, landing at approximately 10:15 p.m. EDT."

We're taking this story with a grain of salt considering its source -- Andrew Breitbart's BigGovernment.com.

The politically conservative website (which has a record of bending the truth) reports that two men were taken off a flight scheduled from St. Louis to Washington, D.C., last night. The men reportedly claimed to be U.S. air marshals but had no paperwork to back that up. The flight was scheduled for take off when it returned to the gate at Lambert-St. Louis International Airport.

A man who says he was on the flight tells BreitbartTV that the two suspects aroused suspicion when they spent time in the restroom before the flight took off. Both suspects were reportedly Caucasian. Curiously, one of the men happened to be seated next to Lt. Col. Oliver North (of Iran-Contra fame), who was seated in first class.

Passengers on the flight bound for Dulles International Airport reportedly had to leave the plane and go back through security along with their luggage. The plane later made its way to the nation's capital without incident.

This morning the Department of Homeland Security made no mention of the alleged incident on its news or alerts pages of its website. More information as it develops.

Yesterday, of course, was the ten-year anniversary of 9/11, with the nation's airports on heightened security.