September 09, 2011 at 5:10 PM
comment
Late yesterday afternoon, Iowa-based Lee Enterprises, parent company of the St. Louis Post-Dispatch and other newspapers, announced some potentially pretty good news: The company had gotten an agreement to push back the due date on some $864 million in debt.

That deal is dependent on the company refinancing another $175 million in debt -- and the company indicated in yesterday's announcement that a Chapter 11 bankruptcy reorganization is not out of the question. But considering that Lee's massive debt had been due in April 2012, the news was pretty good.

It just didn't do much for the company's stock.
And that's a serious concern. Earlier this year, when Lee's per-share stock price dipped below $1, the Securities and Exchange Commission threatened to delist the company, citing a policy that "penny stocks," or any stock that sells for less than $1, is too subject to volatility. The SEC reiterated that threat more recently, noting that, while the company owes nearly $1 billion, it's current market value based on its stock price is just $50 million.

Yesterday's announcement does little to change those facts. The company's stock surged a bit, with a nine percent jump in the early part of the day, but those gains were nearly erased by day's end. At closing time in New York, the stock was selling for just 62 cents, only slightly higher than in previous weeks. 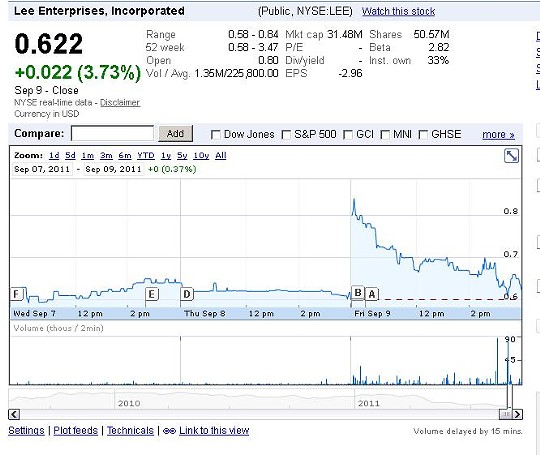 And though a snapshot focused on a three-day period period, such as the one we provided above with the help of Google Finance, suggests the stock is up a bit, the longer view is bleak. The graph above, in fact, perfectly illustrates the SEC's point about penny stocks -- what looks like a pretty big spike this morning is a climb of just about 20 cents per share. It only looks like a lot because, when a stock is selling for 58 cents a share, 20 cents is technically a big percent increase. It's just not a lot of money.

The graph below, which shows the company's stock over a six-month period, makes that all too clear. 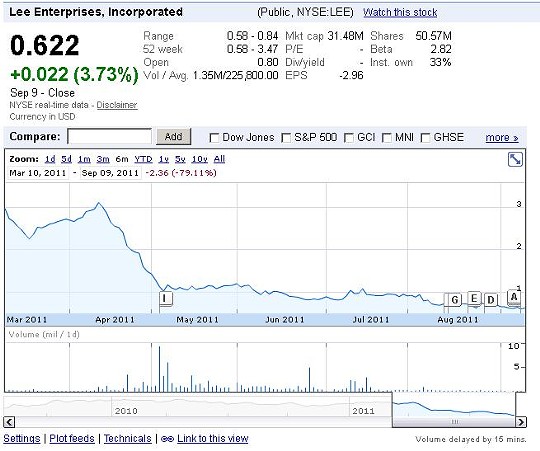 So forget what you read this morning on MarketWatch about Lee being one of the day's biggest gainers. This morning, yeah, the per-share price was up about nine percent. But that meant little in terms of dollars and cents -- and, at any rate, the increase didn't hold.