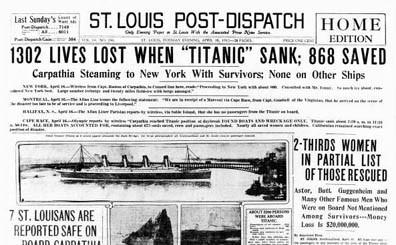 Lee Enterprises, the Iowa-based owner of the St. Louis Post-Dispatch and other newspapers, including the Arizona Daily Star, announced late this afternoon that it reached an agreement with "a significant majority" of its debt holders to amend and extend its credit to 2015 and 2017 -- instead of next April, when the debt was supposed to come due.

The company currently has nearly $1 billion debt; the agreement announced today will delay payment on $689 million of it.

But there's a big "but" to the plan: As a condition to the extension, Lee must refinance an additional $175 million in debt, the company disclosed. That debt, known as the "Pulitzer Notes," was incurred when the company purchased the Post-Dispatch and other papers in the Pulitzer chain in 2005.

And if it can't find someone willing to do the refinancing, Lee says, it will file for a Chapter 11 bankruptcy reorganization.
According to the company's press release,

Carl Schmidt, Lee vice president, chief financial officer and treasurer, said the method for implementing the agreement is expected to be determined within the next few weeks. "Getting the support of more than 90 percent of our creditors is a significant milestone and allows us to turn our attention to refinancing the Pulitzer Notes. Assuming successful completion of that financing, we expect to implement the transactions out of court if we can get lender support up to 95 percent. Otherwise we will seek to implement the transactions through a favorable prepackaged Chapter 11 filing. Such a filing, if necessary, would be expected to have no adverse impact on company operations, employees, vendors, advertisers or subscribers. Subject to dilution resulting from the issuance of the new shares, current stockholders' interests in the equity of the company would be preserved."

The company was planning to file a ream of documents with the Securities and Exchange Commission this afternoon; we'll have more on this story once they get posted and we have time to digest them. In the mean time, no need to panic: Schmidt vows that any Chapter 11 filing would have "no adverse impact on company operations, employees, vendors, advertisers or subscribers."

Lee has recently been threatened with being delisted from the SEC after its stock price -- which once traded at $64 per share -- dropped below 75 cents. As of mid-August, the company's market value was just around $50 million, a stark contrast to its $1 billion in debt.