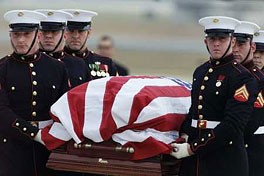 During the heady days of the Iraq War, many liberals lambasted the Bush administration for banning images of flag-draped coffins on TV. They believed that exposing the grim realities of the war would surely lead to more protests against it.

But as it turn out, such televised images probably would have generated even more support for the war.

That counterintuitive discovery is supported by the "sunk-cost effect," which is the theory that many human decisions are based on the desire to recoup previous investments -- even if those investments (like the lives of fallen soldiers) are irretrievable.

A team of Washington University social psychologists believe they are the first to apply the sunk-cost effect to war. In a paper that will appear in an upcoming edition of the Journal of Experimental Social Psychology, the researchers explain that thinking about military casualties subconsciously triggers hawkish sentiments, as a way of justifying the deaths.

Developed during the 1950s as an economic theory, the sunk-cost effect appeals to people's emotions and often leads to poor judgments. Much like a stubborn gambler who keeps losing, or an old married couple that sticks together despite constant bickering, commanders-in-chief sustain their military campaigns in hopes that a victory legitimizes lost lives, say the Wash. U. scholars.

"Sunk costs are resources that are completely unrecoverable, but people still argue for war in order to justify or make worthwhile all those casualties," lead author JP Schott tells Daily RFT.

During their experiment, the researchers primed one group of subjects for investment protection by asking them to visualize eating an expensive lobster dinner that should not go to waste. Then they asked a group of participants in a control group the innocuous question of where they'd like to take a friend for dinner. In Phase 2 of the experiment, each participant filled out a questionnaire about war casualties in Iraq and Afghanistan. Those participants who were primed to be less wasteful with their lobsters were more likely to display pro-war sentiments.

People are notoriously bad at making assessments on when it's time to stop, says Schott. In a hypothetical assessment outlined in the Wash. U. study, for example, subjects were told to imagine injuring their elbows immediately after registering for an exclusive, non-refundable tennis club costing $500. Subjects indicated they would continue to play tennis through pain all summer, even if doctors told them not to.

In regard to the Iraq War, President Bush's aides eventually might have caught on to the sunk-cost phenomenon. In a speech late in his administration, Bush went out of his way to cite people who died in the war, says Schott. "He said that 3,000 people had died, and therefore we must continue to fight in order to make sure they didn't die in vain. Basically he was making the sunk-cost argument."