Brent Roam: From Slasher Films to Sunday Morning Salvation at the Tivoli

On Sunday, September 18, for the first time ever, the Tivoli Theatre in the Loop will begin renting out its space to a religious congregation: the U-City Family Church.

Other cinemas across the country have been doing this for years, including the local Wehrenberg chain (its Des Peres 14 Cine has hosted a start-up church since August).

But the venue isn't the most interesting part about the church in the Tivoli. It's the pastor: He's a former Rhodes scholar and B-horror flick actor who now practices law at Bryan Cave. His name is Brent Roam.

The 40-year-old Roam comes from preacher lineage. He says his granddad, a boxer and bus mechanic, launched a "hard-core, super-strict" Pentecostal church in Wellston back in 1948.

Interpretation of the Bible was literal; movies, dances and baseball games were forbidden. That's how Roam's father once got in deep do-do: He pedaled his bike into the Loop to see a movie. (Yes, at the Tivoli!)

But when he grew up, Roam père became a Christian minister himself. He moved to Bridgeton to raise a family, which came to include his son, Brent.

While at Pattonville High School, Brent Roam became good at two things: wrestling (he rose to team captain) and questioning the Pentecostal faith in which he'd been raised. After studying at UMSL and Mizzou, he received a Rhodes scholarship. It was at Oxford that Brent Roam became "a complete non-believer."

"I was asking questions," he recalls, "and I didn't think religion had good answers."

Thus began a peripatetic period of artistry. First, he toured with a theater troupe to India, where he played the Fool in King Lear.

Next, he moved to Los Angeles, where he landed some gigs acting in commercials for Kent cigarettes, Mustang and McDonald's. He was cast major roles in horror films such as Toolbox Murders and Tremors 4 and appeared in the first two seasons of The Shield.

At the time, he was also singing lead vocals for the alt-country outfit Slydell. He still has the tattoo on his arm to prove it. (After Slydell disbanded, the back-up singers became The Watson Twins; other members joined Beck and Everest.)

But for all his success in music and acting, Roam says, he was miserable. He wasn't much into drugs, although he drank some. He felt he had "no moral compass."

"It was a dark time, to be honest," he recalls.

One day at a bookstore, he picked up a copy of C.S. Lewis' Mere Christianity and flipped it over to the back cover. Anthony Burgess, author of the famously macabre novel A Clockwork Orange, had written a glowing blurb for the book.

So he did. And what followed was a full-blown conversion experience, which Roam acknowledges "sounds bizarre to folks who've not experienced it."

He tracked down a girl who'd come see his band play. Her name was Rebecca. She was nine years his junior, and she'd never left his mind. Within a year, they were married. Roam earned his law degree at Arizona State University, and the couple moved back to St. Louis in 2008, where Roam was hired as a commercial litigator for Bryan Cave.

Encouraged by mentors, he decided to "plant" his own church. But he needed a venue. So he approached the management of the Tivoli.

"I was a little hesitant," he confesses. "I didn't want to come off as a weirdo. But they put me at ease, and they were far more enthusiastic than I ever dreamed of. And, they weren't doing anything on Sunday mornings anyway."

And so an irony came to pass: Where once his father entered and got punished by an intolerant church, Brent Roam entered and created a tolerant one. 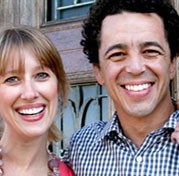 Services will begin at 10 a.m. every Sunday in the main auditorium, with music performed by The St. Louis Big Band, a horn-heavy swing ensemble (Roam says they'll be playing an "eclectic, soulful mix").

The meat of the service, Roam says, will focus on "the core principles that are shared among Christians from every denomination throughout history."

The Loop may not seem a natural place for a church: It's where you get a tatt, drop money on clothes, get drunk, pick up a "tobacco" pipe or comics -- in short, it's commercial and hedonistic, with at least a remnant of anti-establishment ethos. What it ain't is a model of Christian decorum.

But that's precisely why Roam wants to be "embedded" here. And he's ready to talk to anybody willing to walk into the Tivoli. Quoth he:


Having been a complete agnostic for so long, I have a sense of respect and understanding for people who completely disagree with me. And I'm perfectly happy to enjoy them and respect them and love them and appreciate where they're coming from. Even though we disagree about the nature of God. And I think that's a particularly helpful position to take in U. City in this time. There's nothing wrong with people being skeptical. It's good for people to question things and deeply evaluate truth claims about nature of God. Especially with the university here. This is a time when students are exploring these questions.

You can find the website for U-City Family Church here.