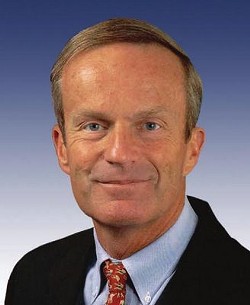 Congressman Todd Akin showed off his conservative bona fides Saturday in a meeting with Tea Party activists in Fulton.

Akin, who's hoping to win the Republican primary for Senate, told the group that global warming is "highly suspect" and that he's proud of his opposition to Medicare.

"I don't find in the Constitution that it is the job of the government to provide health care," he told the Columbia Tribune after the meeting. Moreover, the Republican from west St. Louis County cast himself as the polar opposite of the woman he hopes to unseat, Democrat Claire McCaskill. "If we have ever voted for the same thing, it means one of us has made a mistake," he said of McCaskill.

"Todd Akin's always been clear about his desire to end Medicare, but Senate candidates Sarah Steelman and John Brunner refuse to tell voters where they stand. When more than one million Missouri seniors rely on Medicare, voters deserve to know whether their Senate candidates want to get rid of this critical safety net," said Caitlin Legacki, Missouri Democratic Party spokeswoman.