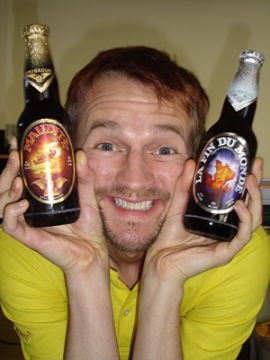 On this eve of Labor Day weekend, Daily RFT would be remiss in our duty as buzzkill if we didn't share with you two new studies on the effects of alcohol and drugs. A group of researchers from the University of Missouri have shown that alcohol turns off the "alarm" in your brain that goes off when you make a mistake, while another group of researchers at Washington University Medical School have shown that stress increases anxiety, depression and a desire for drugs. (We non-scientists call that "self-medication.")

"Our study isn't the first to show that alcohol reduces this alarm signal," Bruce Bartholow, the psychology professor who ran the Mizzou study, conceded in a press release. "But contrary to previous studies, our study shows that alcohol doesn't reduce your awareness of mistakes -- it reduces how much you care about making those mistakes."

In Bartholow's study, researchers monitored the brain activity of 67 subjects between the ages of 21 and 35 while they attempted to work on a mildly challenging computer task. One-third were given an alcoholic beverage while the rest were given either a non-alcoholic drink or a placebo.

Also, the alcohol drinkers reported feeling happier, or, at the very least, "less negative," which contributed to their carelessness.

"There are certain circumstances under which reducing the brain's alarm signal could be seen as a good thing, because some people, like those with anxiety disorders, are hyper-sensitive to things going wrong," said Bartholow. "In some people, a small amount of alcohol can take the edge off those anxious feelings, but consistently drinking as a way to reduce anxiety can lead to serious problems, including alcoholism."

The study will be written up in the Journal of Abnormal Psychology.

(Incidentally, alert readers may remember Bartholow for another study he did last fall that confirmed the fears of college administrators everywhere by proving that Bud Light "Fan Cans" were indeed more appealing to college students.)

The Wash. U. researchers, meanwhile, were more interested in the harder stuff, namely cocaine.

Working in conjunction with a team of scientists at the other Wash. U. (that would be the University of Washington in Seattle), researchers studied the effects of stress on coke-addict mice. Mice, by the way, don't snort. They get injections.

Anyhoo, it turns out that when mice get stressed, their brains release hormones that tell the kappa-optoid receptors on their neurons to release a protein (called p38α mitogen-activated protein kinase, or p38α MAKP) that tells the cells to produce less serotonin, the neurotransmitter that helps keep them happy. When the mouse-brains have less serotonin, the mice start acting like depressed coke addicts.

"We call these responses 'depression-like' and 'addiction-like' behaviors because we can't ask mice if they're addicted or sad," said Wash. U. researcher Michael R. Bruchas in a press release. "But just as depressed people often withdraw from social interactions, stressed mice do the same thing. We also observed that stressed mice return more often to the place where they received cocaine."

However, when the scientists used new genetic technology to disable the p38α MAKP protein, the mice stopped acting withdrawn and looking for their next fix, even when they were in a stressful situation -- in this case, stuck in a cage with a particularly obnoxious "aggressor mouse." (Bruchas compared the aggressor mouse to a mean boss or a bully.)

These studies, naturally, have implications for humans.

"When people take antidepressant drugs called selective serotonin reuptake inhibitors, or SSRIs, to relieve depression, the drugs act on a cellular pump called the serotonin transporter, and this results in more serotonin in the brain," Bruchas explained. "We think that the involvement of the p38α protein and kappa-opioid receptors represents an important finding in figuring out how it is that cells regulate depressive and addictive behaviors."

Next up: Running experiments to see if disabling p38α MAKP affects serotonin levels in amphetamine- and nicotine-addicted mice.

The study was written up in the journal Neuron.