EPA Fines Wash. U. For Lead Paint in Off-Campus Housing 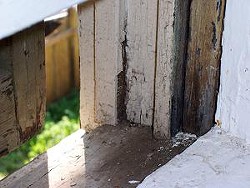 Washington University and the EPA reached a settlement this week, in which the St. Louis college agreed to pay a $2,778 civil penalty and spend at least $24,998 to replace lead-based paint in some of its off-campus housing.

According to the EPA, Washington University leased three apartments at 6012 McPherson Avenue and 6048 McPherson Avenue, northeast of its Danforth Campus, to student tenants in 2008, 2009 and 2010, without disclosing to them that the St. Louis Health Department had previously cited the university for lead-based paint violations at those properties in 2000 and 2006.

The settlement alleges that Washington University stated in lead warning statements attached to those property leases that it had no knowledge of the presence of lead-based paint or lead-based paint hazards in the units. The university also failed to provide tenants with records and reports of the city's citations of the units in violation of federal law.

As part of its settlement with EPA, Washington University agreed to perform a supplemental environmental project that will involve the replacement of approximately 103 old windows in married student housing units located at 6317 Cates Avenue, just west of its North Campus. That project is expected to cost between $24,998 and $31,000. Dust from lead paint is most harmful to young children and can lead to intelligence loss and behavioral problems.