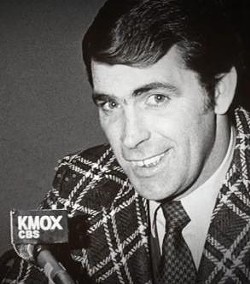 Hoping to duplicate what their fan base did in getting Stan Musial the Presidential Medal of Freedom, the Cardinals have once more reached out through social media to honor one of their own.

The Redbirds want their legendary broadcaster Mike Shannon to be among the finalists for the Hall of Fame's 2012 Ford C. Frick Award, recognizing the nation's best baseball commentator. And they've launched a "Like Mike" online campaign to help accomplish the goal.

Visitors to cardinals.com/likemike are encouraged to go to Facebook and vote for Shannon. There's even a video on the site of fellow Cardinals' broadcaster Jon Rooney making a pitch for his colleague.

"Over the years Mike Shannon's distinctive voice, infectious laugh and -- well -- let's just say his trademark, one-of-a-kind way of calling the game have become one of the most cherished parts of Cardinals baseball," says Rooney.

Curious aside: Cardinals TV broadcaster Al Hrabosky is also among the names of candidates eligible for the Frick Award, but there's no social media campaign for him -- not yet, anyway.