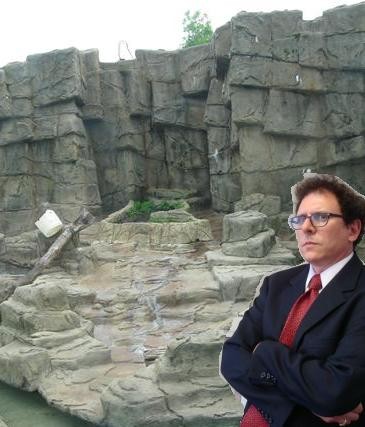 The Saint Louis Zoo has put the kibosh on a publicity stunt that was to be held at noon in front of the polar bear exhibit.

As Daily RFT reported earlier this week, Webster University graduate student David Schwartz was recently kicked out of the school's counseling program after being told he lacked the empathy to be a good mental health counselor. Schwartz is now suing the school.

But it doesn't end there. Yesterday Schwartz's attorney, Albert Watkins, informed media of a press conference set for noon today in which his client would put on an "empathy workshop" in front of the zoo's polar bear exhibit. The zoo currently has no polar bears after its last one died in 2009.

"Mr. Schwartz feels badly for the lost bear and, having first hand experienced the trauma of loss, desires to emote his empathy for bears the world over, and Hope in particular," said Watkins in a statement.

But that was yesterday. This morning brings another alert from Watkins, informing the media that the empathy work has been canceled. Writes Watkins:


After announcing the Empathy Workshop plans yesterday, we received a very nice note from Wyndel Hill, the Vice President of Internal Relations for The Zoo. Mr. Hill explained The Zoo's policy with respect to "public expressive activity" being prohibited on Zoo grounds "because these activities interfere with the zoo visitor experience." The policy makes sense. My client was extremely empathetic to the potential for interfering with the "zoo visitor experience" and elected to cancel what was expected to be a very lightly attended workshop. Perhaps the exercise proved to be the workshop itself?