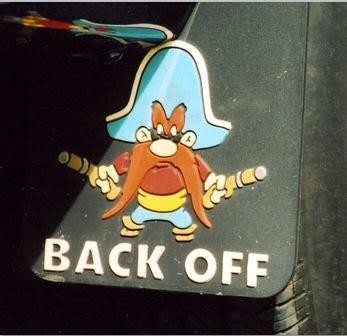 Police say a man angry about his child-support payments drove his tractor trailer into the Madison County Courthouse yesterday.

The Belleville News-Democrat reports that Roy Conger, of Collinsville, stands accused of the felony charge of criminal damage to state-supported property after backing his 2010 International tractor-trailer into the courthouse around 4:15 a.m. yesterday. The vehicle got stuck on the stairs of building, prompting Conger to flee the scene. He turned himself in at the jail moments later and is being held on bail set at $25,000.

Conger, 42, had unsuccessfully tried to get his child-support payments reduced this month after losing his job. But a judge dismissed Conger's petition, ruling that he had lost the job due to his own actions.

The Post-Dispatch adds that earlier this year Conger's ex-wife obtained an emergency protection order against him. In court records the ex-wife included a letter Conger had sent to a state agency when a lien was placed on his bank account.

"You will hear about me and read about me. I promise that," the letter warned.

At last, a man who fulfills his promises!