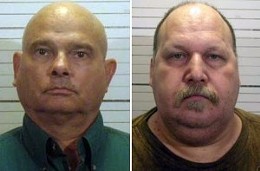 Last week, the Belleville Police department arrested numbers 25 and 26 of the worst child pornography traffickers/downloaders in the state of Illinois. (The BND covered it, as did KMOV ; the Post-Dispatch ran a short on it).

It's all part of attorney general Lisa Madigan's "Operation Glass House"  (named that way to remind these slugs that they can't hide their seedy activities; law enforcement can "see" through their walls).

Civil libertarians may not be crazy about that kind of prying. And anyway, these two guys are innocent until proven guilty, right? Well...


Take one of them, Mike G. Telkamp, who was arrested Thursday. According to Madigan's office,

Uh, that's not something you'd accidentally click on while, say, surfing for a good deal on patio chairs.

By the way, that video has been downloaded 979 times in the past year in Illinois alone, the AG added.

Makes you wonder how many times it's been downloaded in Missouri.